A cat named Lola is very lucky to be alive.  It seems that this strong willed feline followed her owner threw a hot desert for many days.  The pair made their way from the country of Sudan into Libya. This long journey took its toll on the feline, but her journeys did not end there.  The feline and her owner made their way onto a migrant boat, in hopes of reaching Italy.  While on the boat they managed to survive the elements and they also eluded capture by border agents.  But their journey came to an end when a British patrol boat stopped the vessel and took both the cat and the owner into custody.  The pair were then handed over to Italian authorities.

The month’s long journey was finally over and the trip really took its toll on the pair.  They had to be rescued from the boat and both are now trying to recover.  Lola is currently under quarantine, were she is being cared for and closely watched.  The authorities do not know if the feline has any contagious diseases and are taken all the necessary precautions.  The cat’s owner, who is only known by Sama, was very upset that her cat was taken away from her and had to be calmed down by aid workers.  Sama was taken to a migrant center and it is not known if she will be able to remain in the country.

The mayor of the town in which the pair were transferred, stepped in and told the woman she would once again be reunited with her cat.  This put the woman at ease and once the cat has been checked out by a Vet and given the right vaccinations, the cat will return to her.  A local animal activist group is helping to take care of the cat and is keeping her in isolation for everyone’s safety. Soon the cat will be back with her rightful owner and hopefully the government will give both of them asylum.  Surely we will be hearing more about this story in the following days. 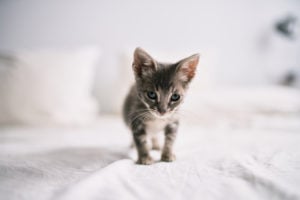