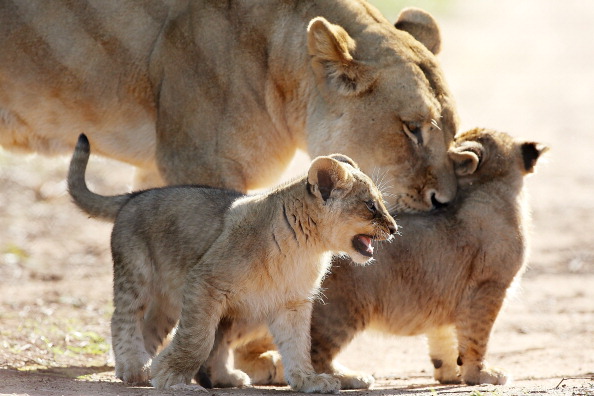 When I was a child, a purebred dog was the only kind worth having. Fast forward two decades and people are paying ungodly amounts of money for dogs that are essentially mutts. They claim that they are being bred as hybrids, but people are buying animals that are two purebred breeds that have been bred to create something called a designer breed (once called mutt). While many cat owners are a little bit less concerned with breed – many are happy to just find a kitten at the shelter to bring home to their kids, more and more are becoming obsessed with the idea of designer cat breeds. These are cats that are not usually found free of charge in a box outside of the local supermarket or on the side of the road. They’re cats that cost a pretty penny, and what that means is that they’ve become designer breeds. And if you’re not sure what constitutes a designer cat, well, we are happy to tell you which 10 are the most popular at the moment. 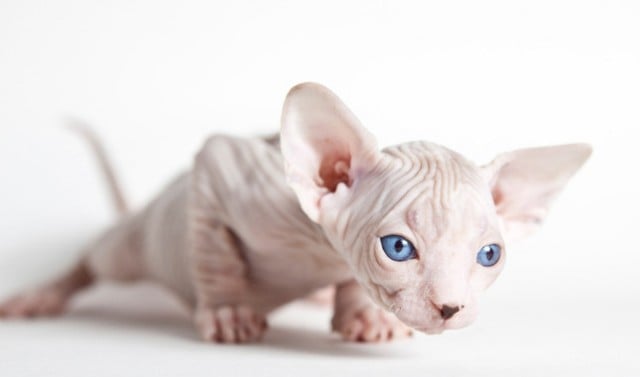 You know this cat, and you might wonder why it’s on the list. It’s not possibly a popular cat breed, right? Wrong; it’s very popular. This hairless cat is one that people love and pay big bucks for. The reason is very simple; this is a breed with an amazing personality, which means that people who encounter it cannot help but fall in love with it despite the fact that at first glance, it’s a cat without hair. With a personality this remarkable, it’s impossible not to want one. And those who do have them usually end up with more than one throughout their lives. 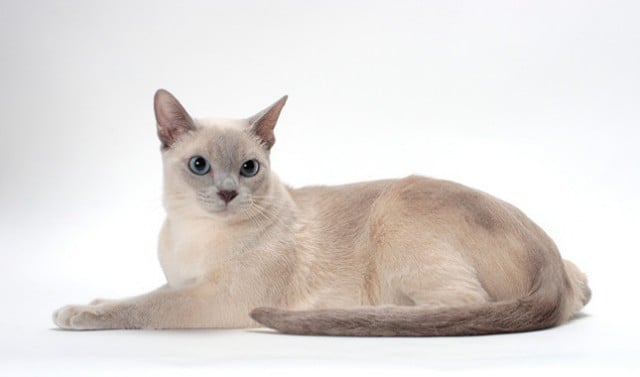 This is what you get when you breed a Siamese with a Burmese, and it’s really cute. It’s also a lot of fun. This cat is one that is playful and loving, and it’s more like a dog than a cat at times. It has no problem climbing on your lap and being affectionate, and it’s what people love so much about it. It’s a gorgeous cat and it has a stellar personality, and that combination makes this a very popular breed to call your own. 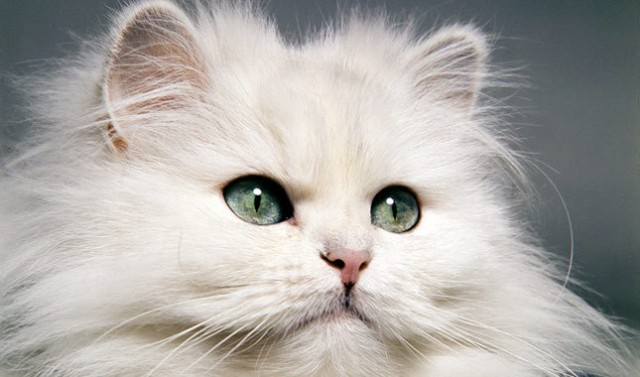 You already saw this one coming, but this is one of the most popular cats in the world. People love the Persian thanks to its gorgeous long coat and it’s very lovely eyes. It’s the kind of cat that never loses its designer appeal, no matter how long it’s been around. I wanted one as a child, and I never understood why my parents wouldn’t let me have one. But they’re expensive and all that hair is a lot of work to maintain, so now I get it. 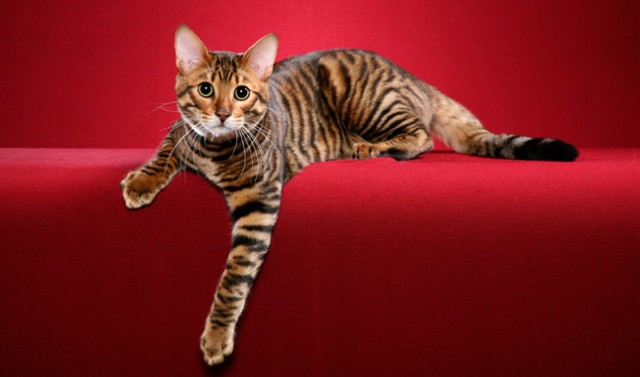 It looks like a tiger, but smaller, but it isn’t. And it’s not a cat that was bred with a tiger, either. It’s just the result of some serious work by a breeder that decided a house cat that looks like a tiger would make big bucks back in the 80s. He worked hard to find just the right domestic tabbies with just the right stripes to create this breed, and it worked out quite well for him. 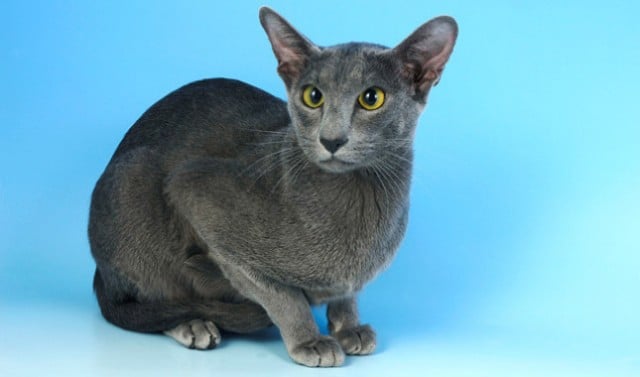 This cat is the result of a domestic cat and an Oriental that occurred decades ago somewhere in the 60s. The result is a gorgeous cat with the markings of something very exotic mixed well with the look of an everyday house cat. It certainly makes for a lovely cat, and with a very calm personality and demeanor – and those big eyes – people are crazy for it. 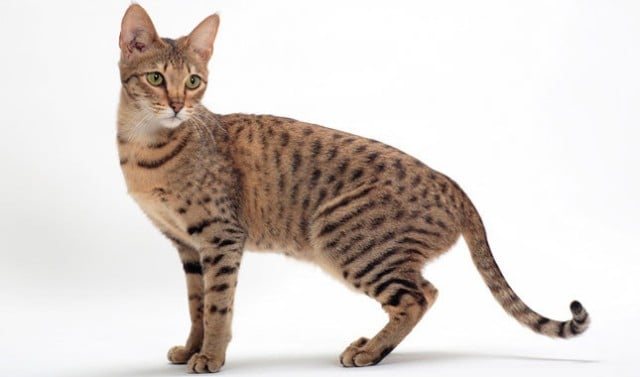 A gorgeous cat with markings that make it look like a truly wild animal, this cat is a breed that makes you want to just stop what you are doing and find one to take home. It’s a domestic cat mixed with a wild cat, and some of them are very expensive. Actually, they’re all very expensive. However, according to The International Cat Association, the highest class in this breed could sell for as much as $30,000, which is a basic used car. That’s a lot of money to spend on a cat. 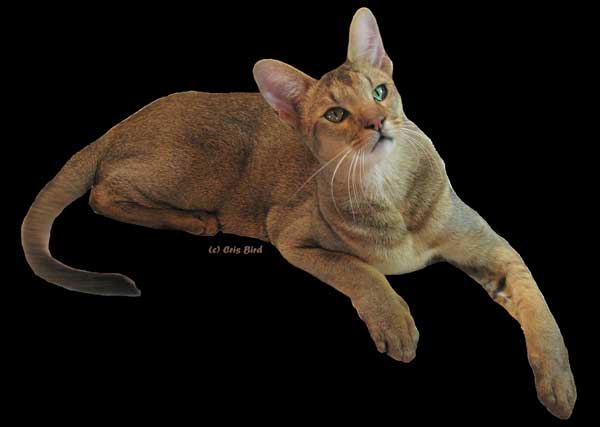 If you have no idea what this is, welcome to the club. This is a cat that originated back in the 60s when someone had the bright idea to mix a shorthair domestic with wild jungle cats in the Middle East. It looks large and mean, scary and a bit like it might like to eat you for breakfast, but it’s a sweet cat with a very loving and affectionate personality. Perhaps you might consider this cat if you’re in the market for an animal that scares people away. 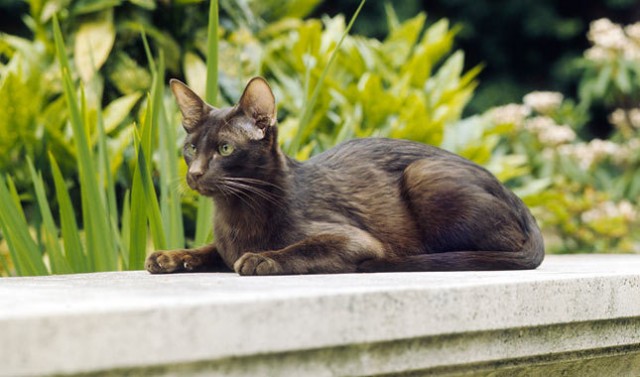 There is probably not a lovelier cat in the world than this one. With a gorgeous deep chocolate brown coat and a beautiful set of green eyes, this is a cat that is nothing short of positively striking. It’s gorgeous, lovely and completely worth the time and effort it takes to find one and buy one. This is a cat you don’t see often, but it’s one you’ll love. 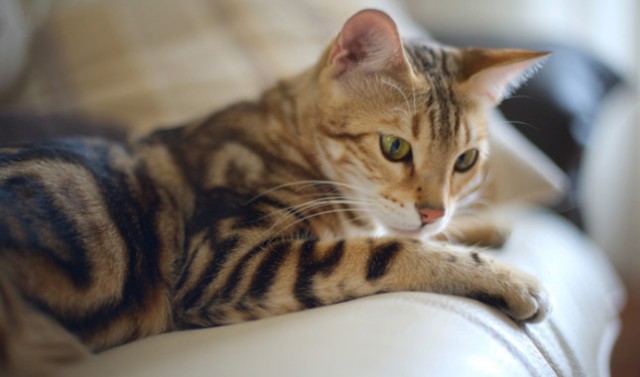 It looks like a wild cat, but it’s a domesticated cat that strongly resembles a wild animal. That’s what people love most about this particular breed, too. It’s gorgeous. It’s not as big as you might think considering it does closely resemble something you might see at the zoo rather than something you’re used to seeing in someone’s house, but that doesn’t mean it’s not a gorgeous cat. People pay top dollar for Bengals. 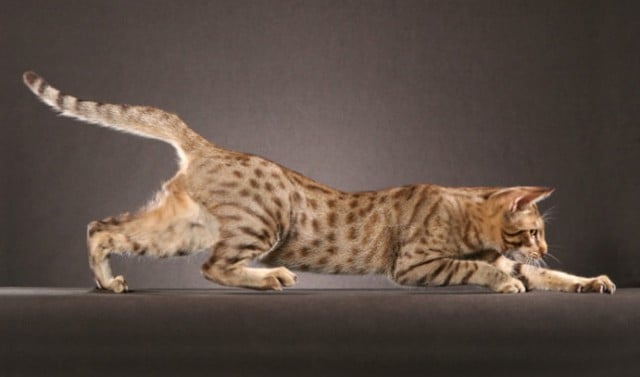 This one looks a bit like a white tiger, and it has the most loving and affectionate personality you’ll ever encounter. The only thing is that it’s such a designer breed it really is a mutt. It’s the cross between an Abyssinian, an American Shorthair and a Siamese cat, and it’s gorgeous. People want this cat because it looks wild but behaves like a dream. 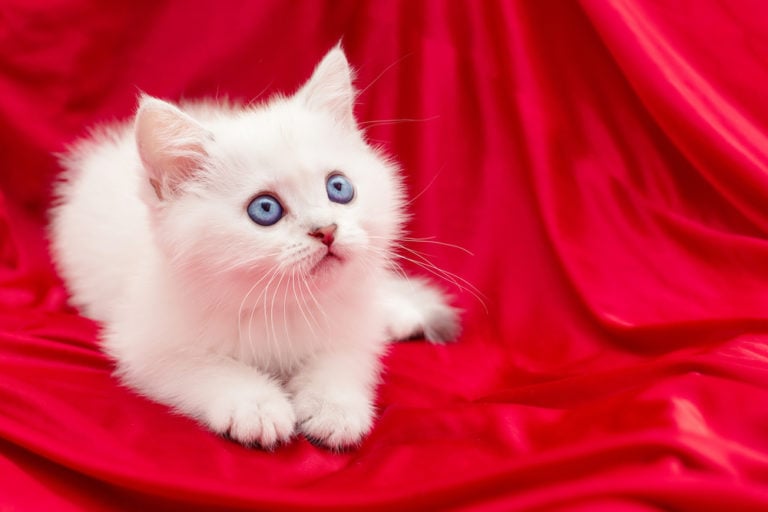 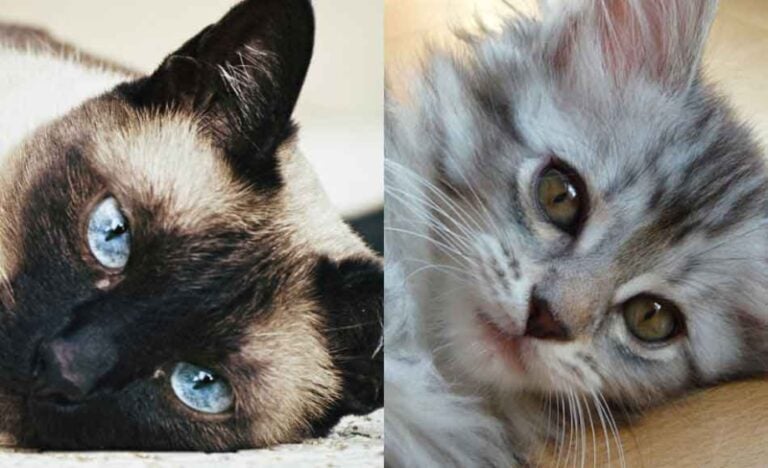 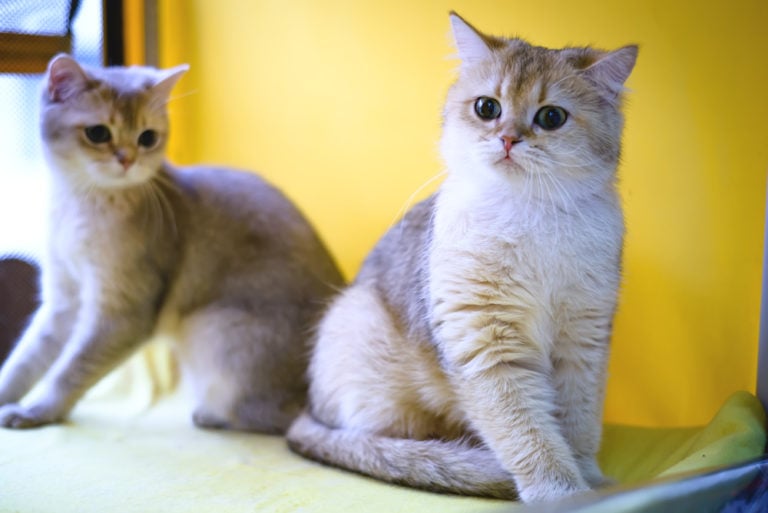 The Burmilla is a cat breed that came into existence in recent decades. It was created by crossing a couple of other cat breeds. One would be the Chinchilla Persian. The other would be the… 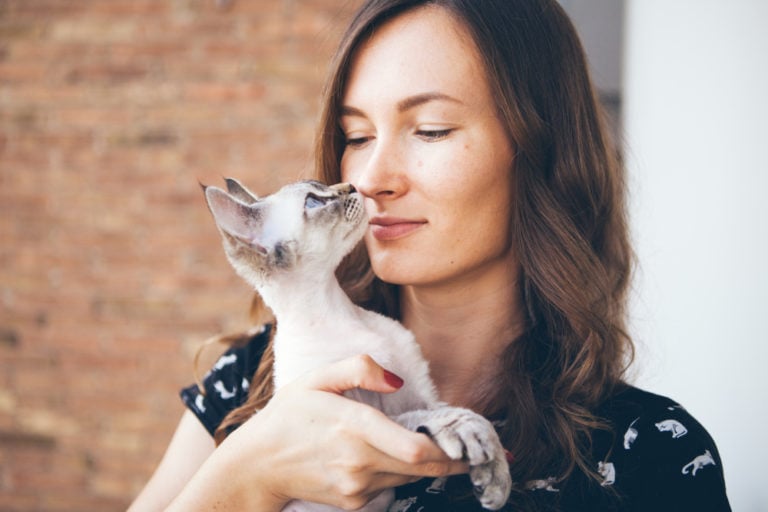 Someone with a cat allergy can notice symptoms of the reaction: sneezing, hives, sneezing, swollen or irritated eyes. According to the Asthma and Allergy Foundation of America (AAFA), up to three out of every ten… 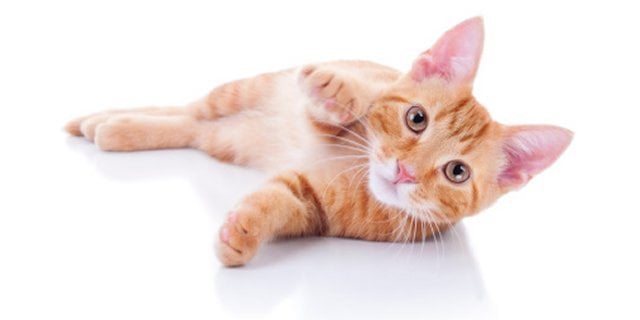 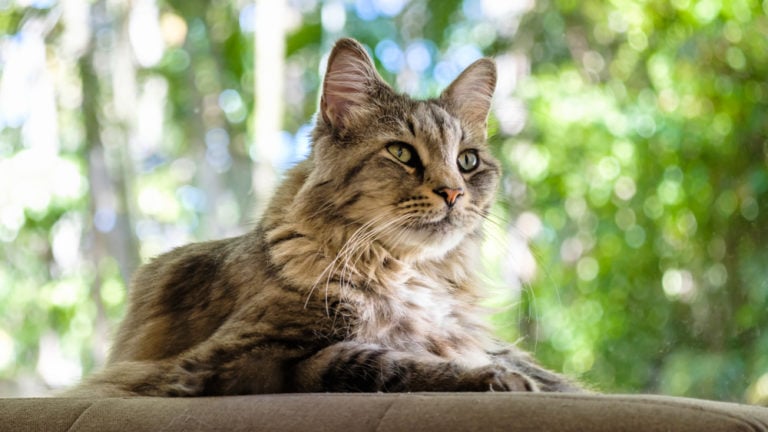