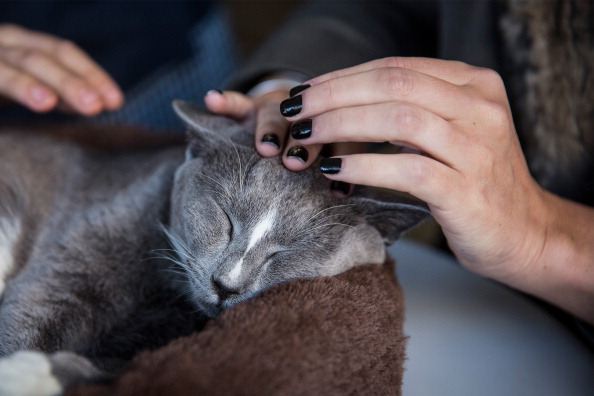 Being a cat is not that hard; until it is that hard. You’re cute, most are fluffy, people love them and there are just so many different ways you can look at how much fun it is to be a cat. You sleep all day. You rule the house. You get to do things that no one else is even remotely permitted to get away with, and people expect you to look at them like they’re morons (something the rest of us get in trouble for doing on a regular basis). What’s so hard about being a cat? These pictures prove that being a cat might mean becoming a bit more…flexible…about your sleeping arrangements, but that doesn’t mean that being a cat is hard. I mean, look what they can do when they sleep. Pictures like this just make you wonder what they can do when they are awake. 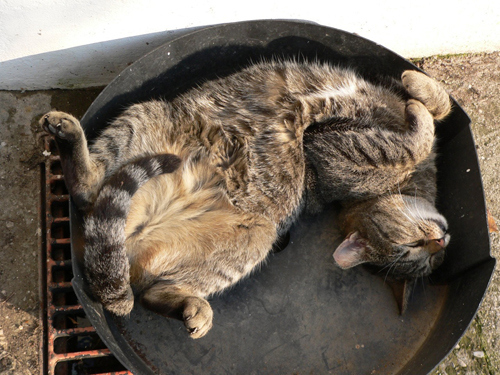 In a Circular Bin

Why not take a nap in a bin that looks like a circle in the middle of what looks like a busy street? I can’t imagine there is anything there that might make sleep difficult in any way, not in a position that looks so comfortable and inviting. 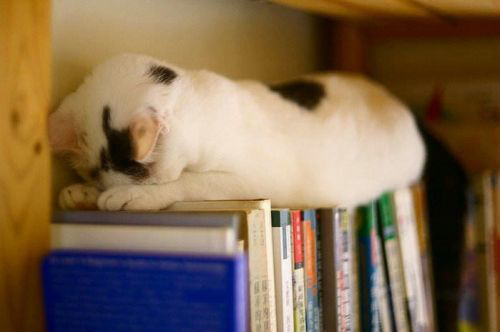 On a Book Shelf

Reading is tiring. You swear you’re going to finish the chapter and then head to bed, but three chapters later you know you’re not moving until you either pass out or you finish the book. It looks like this cat couldn’t put it down, either. 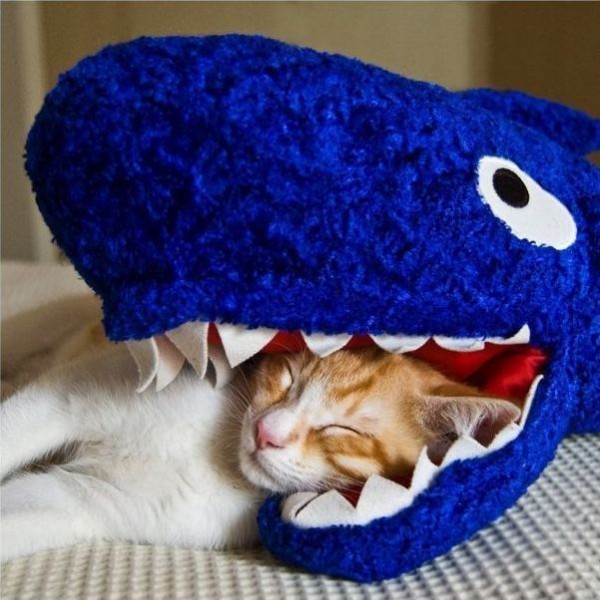 They say that more people die from donkey attacks than shark attacks – or something to that effect – each year, but this cat is proving that being the victim of a shark attack is just plain tiring and worthy of a quick nap. 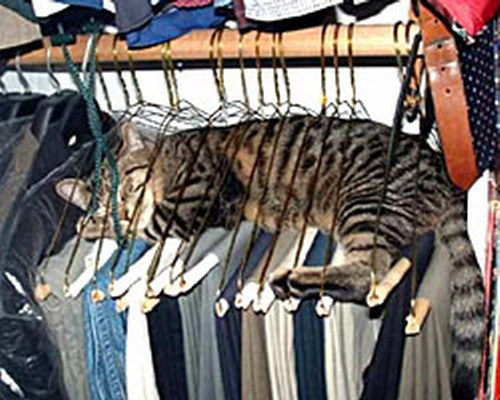 Not Coming out of the Closet

There’s always that moment in someone’s life in which they contemplate coming out of the closet. They might wonder if now is the right time, though. This cat, apparently, does not find right now to be a good time to come out of the closet. He wants to sleep on it a bit. 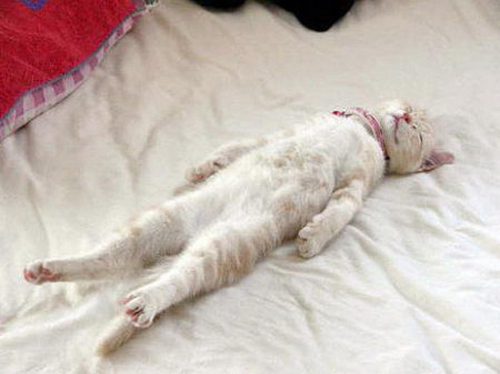 On the Straight and “Arrow”

There has to be a dream of some sort going on right now in which this cat is being jet fueled into outer space out of a canon or something. What else could this be? 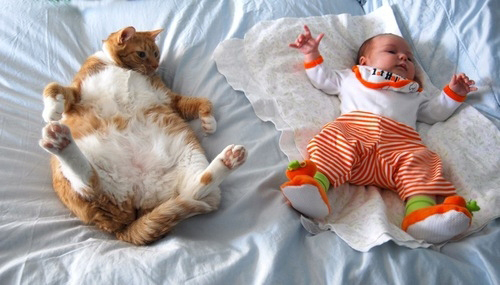 Most people don’t get to sleep like a baby, since babies wake up all the time. This cat will not be told what to do, though. He’s sleeping like a baby. But not just any baby; the one he has deemed his own. Do not disturb. 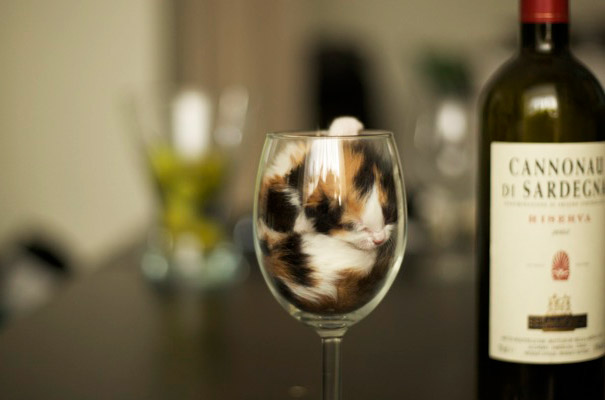 In a Wine Glass

There’s a good chance the person that owns this cat has a drinking problem. Why else would this cat fill a glass made for wine with cat? To prevent the drinking of the wine, of course. 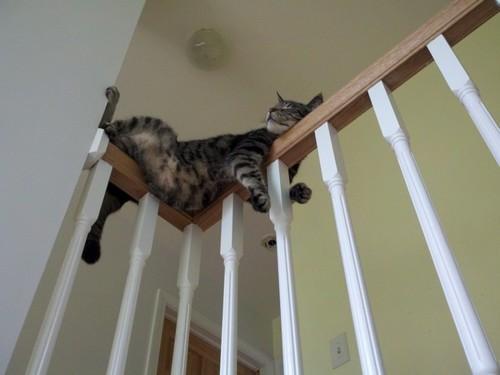 By the time this cat wakes up, it’s going to be because he was dreaming he was falling. Oh, wait; that wasn’t a dream. This cat is hitting the floor before nap time is over. There’s no getting around it; we’re getting straight to the point. 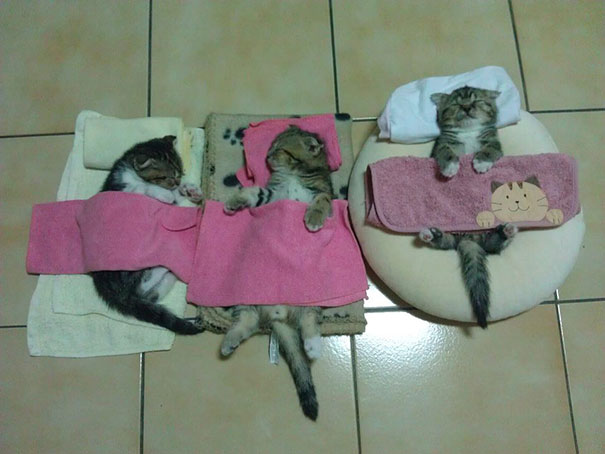 In a Homemade Bed

These cats know that being frugal does not mean being cheap. Why spend money on a cat bed when you can use household items found everywhere to create beds that are perfectly made for the best of the feline friends you have. 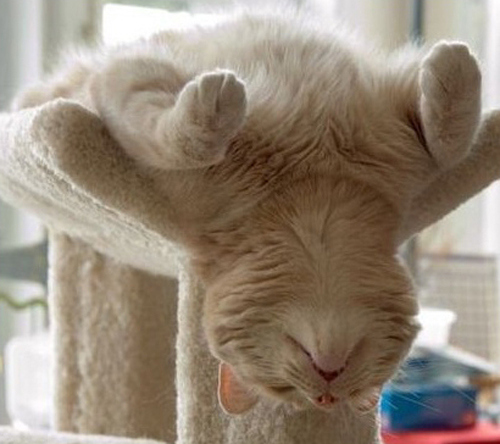 This cat is having an identity crisis. He knows he’s a cat, but he wants to be a bat. Or maybe he has no idea he’s not a bat. We don’t know. 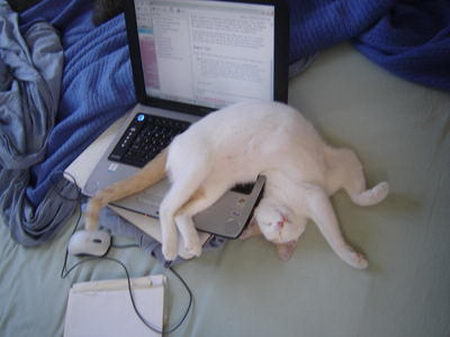 The Middle of the Work Day

If only I could just plop down in the middle of the workday on my desk with my computer running and my thoughts on hold. But I have the world’s most demanding bosses. They’re 1 and they always need something – I mean, they can’t do anything for themselves (ridiculous, right?). 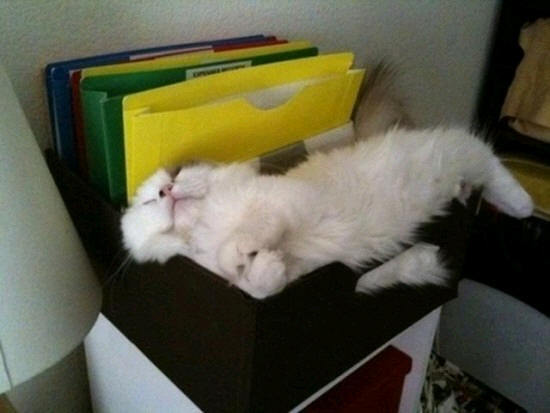 There’s a File for That

Why store boring old tax documents and report cards when you could just make room for the cat to take a nap? There should be nothing in anything unless the cat decides he wants to be the something in the anything. 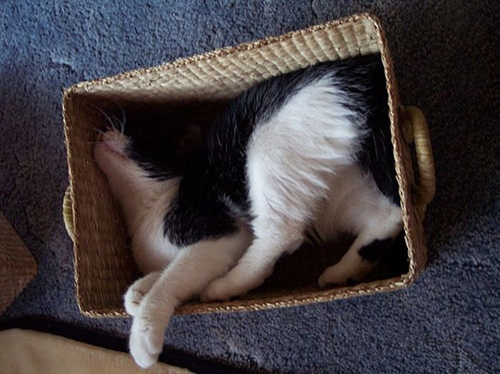 Laundry, toys; cats. Yes, who needs the others when there are cats in the house looking for a place to sleep? And why not sleep in a basket that looks so soft and fluffy and not at all comfortable? 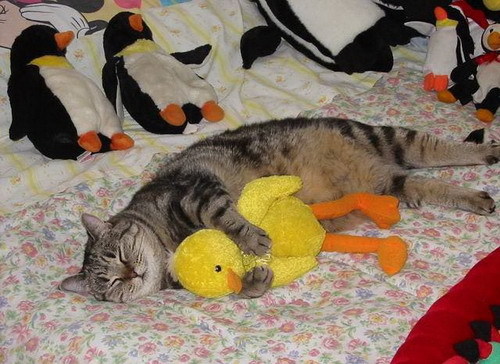 The kids were playing ball in the house and someone told the cat to duck, and he took it the wrong way. That’s all right though. A nap with a duck does seem like a good way to nap. 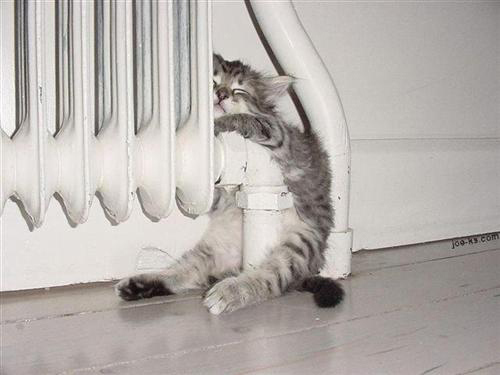 So hot in heerrrrrrrr….there’s a little Nelly playing in the internal dance machine that probably was this cat before it passed out on the radiator. We choose to think that since we know no respectable cat owner would leave a cold house for a feline friend. 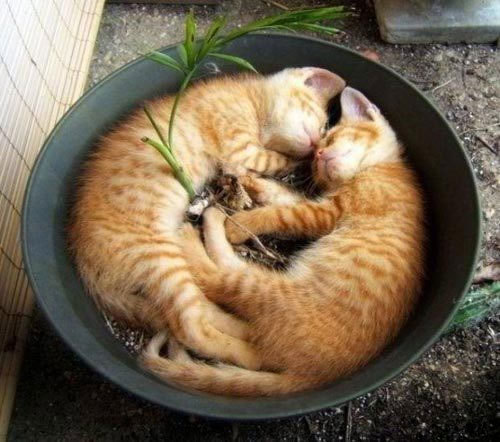 In a Flower Pot

Flowers are too much work and gardening is over rated. These cats want their owners to spend more time with them, so they’re suffocating the plants. But that’s hard work, so they’re also napping. 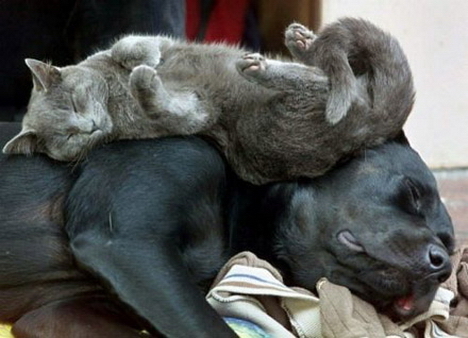 On a Doggie Bed

Cat beds are overrated and doggie beds are so much more comfortable. Oh, wait? You mean they’re not actually made of dogs? What a disappointment. I’ll sleep anyway. 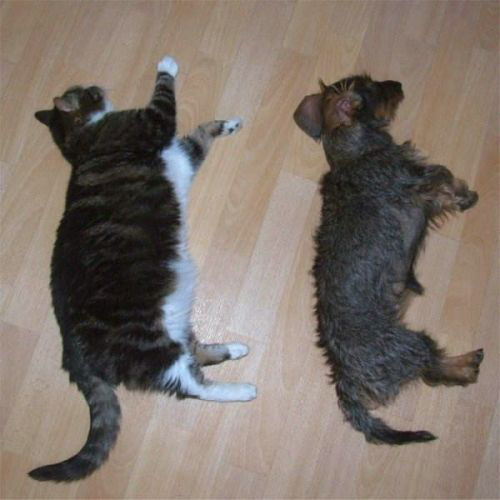 This dog looks like it has too much fun, and you always take it outside, where there are small creatures and things to do. I want to go out there. Perhaps if I make like a dog, you will walk me, too. 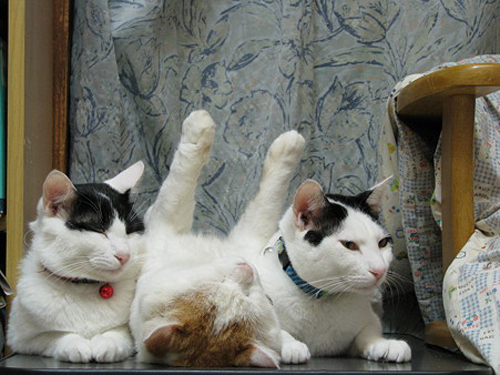 And sometimes cats just fall asleep here, whatever this is. It’s cute, so we’re down with it. We don’t hate what the cat has going on right now. 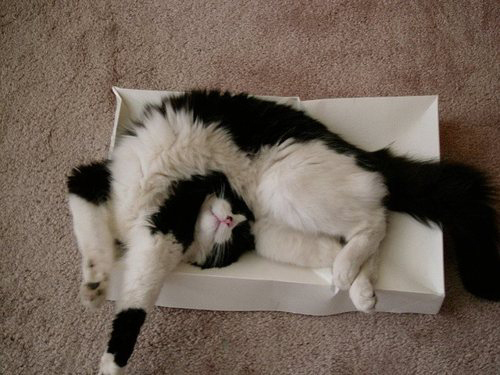 I Gift Myself to You

Wrapping presents around the holidays is a lot of work. This cat has decided he’s not giving gifts. He’s giving himself. But he’s not going to go any further than just sleeping on top of the box. You get the gift, right? 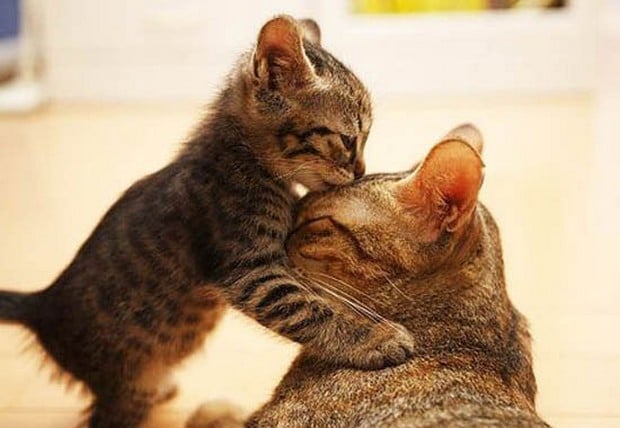 We see our cats doing “human” things on a daily… 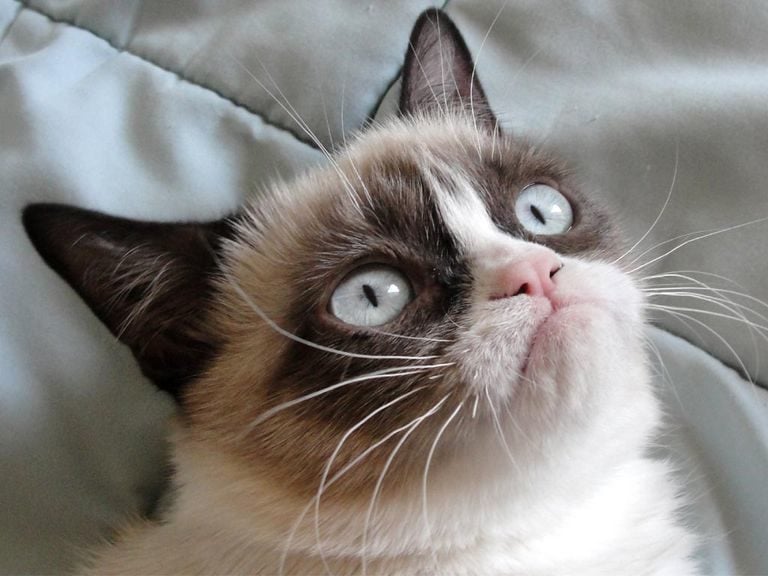 A picture is worth a thousand words. When you slap…

Firefighters are men and women that work very hard to… 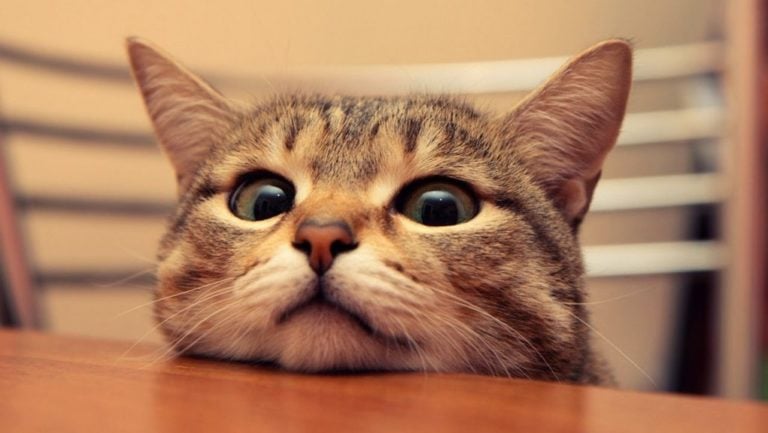 No animal in the animal kingdom is as smooth as… 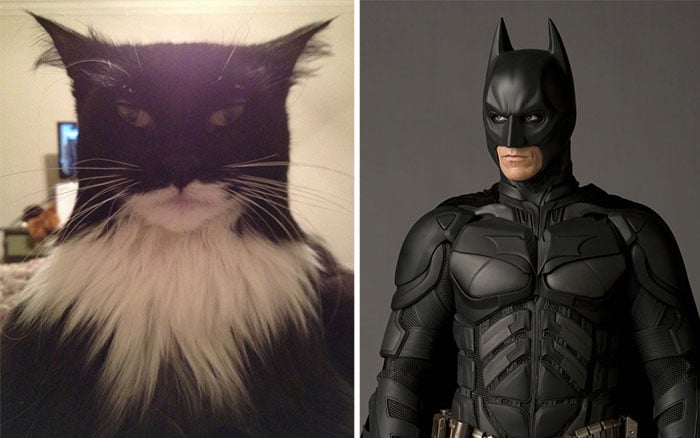 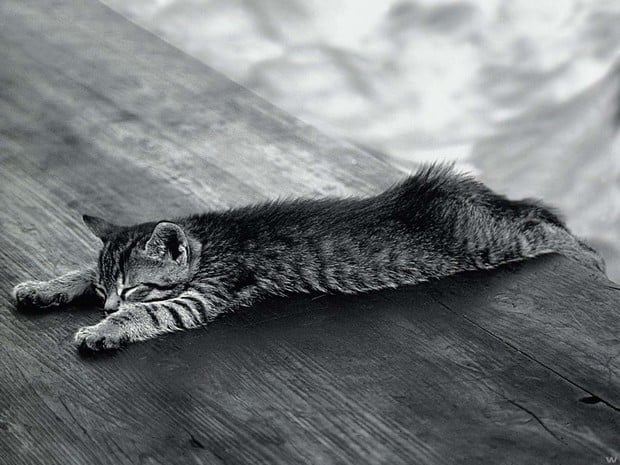 Catster did a great piece today on odd places that…