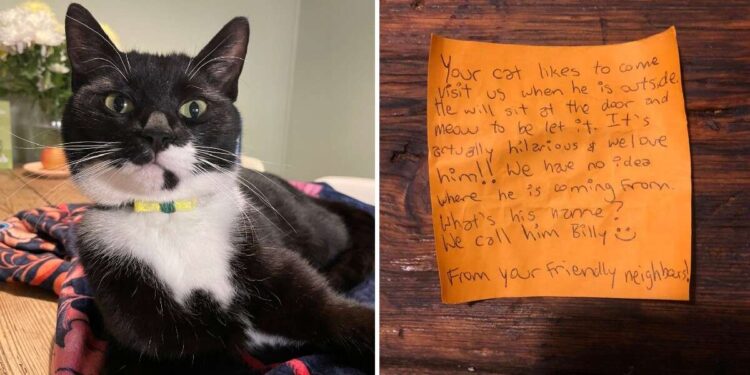 While some cats enjoy the life of a layabout, snoozing on their fluffy beds, others are more adventurous. Pet owners with curious cats with wanderlust have their work cut out for them in keeping track of their beloved pets. We recently learned about a roaming cat who connected its owners with other people in the neighborhood. Billy is a cat that loves exploring his neighborhood and his friendly nature has made him one of the most beloved characters in the neighborhood. We had to retell his story.

Cat returns home with a note on his collar

Daily Cats shared the story of a cat named Billy who has a habit of roaming through his neighborhood to say hi to the neighbors. Billy is a rescue cat and at the age of just one year old, his owners give him the freedom to come and go through a pet door flap that allows him access in and out of his home at will. His owner is Zack King who would worry when Billy would disappear for hours. He loves to play outside and then comes in the house for a catnap. One day, Billy showed up with a note folded into a plastic wrapper attached to his collar. The note was from a neighbor who shared that Billy visited them. They didn’t know the name of the cat and asked on the note, also letting the owners know that they adore him and welcome his visits. King’s girlfriend Olga responded to the letter with a response. She attached it to the cat’s collar. Neither she nor King had any idea which neighbors had written the note, but they replied. When Billy returned, the neighbors had received the note and sent a response. Soon the neighbors who were previously strangers became pen pals. Billy delivered the written notes back and forth. The new friends shared various things. Neither party asked for the names of the other party, and their identities remained a mystery. The mystery has been enjoyable for everyone.

Billy renews our faith in humans

When you live in a new neighborhood like King and his girlfriend Olga, it isn’t always easy to make friends. When you don’t know your neighbors, it’s tough to gauge the neighborhood’s safety. Pet owners responsible for roaming cats worry about their safety when they go on their walkabout. King and Olga were lucky that pet-loving and caring neighbors lived nearby. It renews our faith in humanity to hear such a touching story. Billy has two families looking out for his well-being. It’s nice to know that others in the neighborhood look out for one another’s pets, but sadly, that’s not always the case.

Mr. King allows Billy to roam as he pleases. It’s a gesture out of kindness, and he’s fortunate to live in a neighborhood where the system works. Cats that spend a lot of time outdoors may face threats to their health and safety. They may love their free time and independence, but dangers are lurking around every corner in some locales. The American Humane Organization warns that cats roaming the neighborhood may encounter other animals of a predatory nature. Loose dogs pose a threat in rural and urban settings. Dog attacks can be fatal. In rural areas coyotes, foxes and raccoons are dangerous predators for cats. In Florida, alligators are a threat. Cats that hunt wild rats and mice may inadvertently eat a rodent that ate poison. Cats may also come into contact with rodent poison when hunting them. Another environmental toxin is antifreeze which is ingested by hundreds of animals annually. Some cats climb into tall trees and are unable to climb down. It’s also possible for cats to get stolen or hit by automobiles when crossing the road. Another concern is that your cat could come into contact with stray cats and other animals that could spread parasites or diseases. Rabies is a constant threat, as well as worms, ticks, fleas, or other contagious health conditions.

How to protect cats from outdoor dangers

Owners who allow their cats to freely come and go, like Mr. King can take steps to increase the safety and well-being of their pets. Tractive GPS recommends placing a sturdy collar on your pet and equipping it with a GPS tracker. The device will let you know where your cat is at all times. It tracks the movement of your cat and makes it easier to find your beloved pet wherever he goes. It doesn’t solve any of the other problems, but adding a tag that identifies your cat can increase the chances of his safe return home if he is lost and found by a concerned citizen. Microchipping can also help authorities find you if your cat is picked up as a stray and taken to an animal shelter. You can also make your cat want to spend more time in the house by providing him with interactive toys that are fun and challenging for cats.

Cats that spend most of their time indoors are safer than those that are allowed to roam the neighborhoods. Billy the cat shows us that you can make new friends through your cat, but he’s one of the lucky felines that found good neighbors with whom to socialize. Most of us aren’t that lucky. There are many dangers for outdoor cats, and it’s a good idea to keep them inside as much as possible. If you do allow your cat to be a free-roamer, it’s wise to have him chipped, provide a collar and ID tag, or track him with a GPS device to keep a line on his whereabouts. Cats are independent creatures, but it’s up to us to protect them from the dangers in the big open world around them. 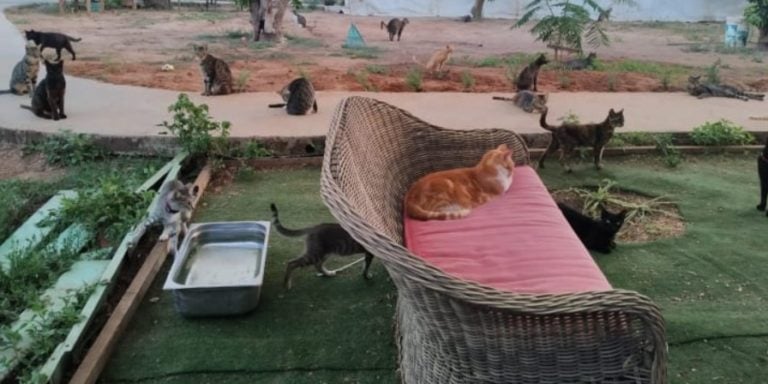 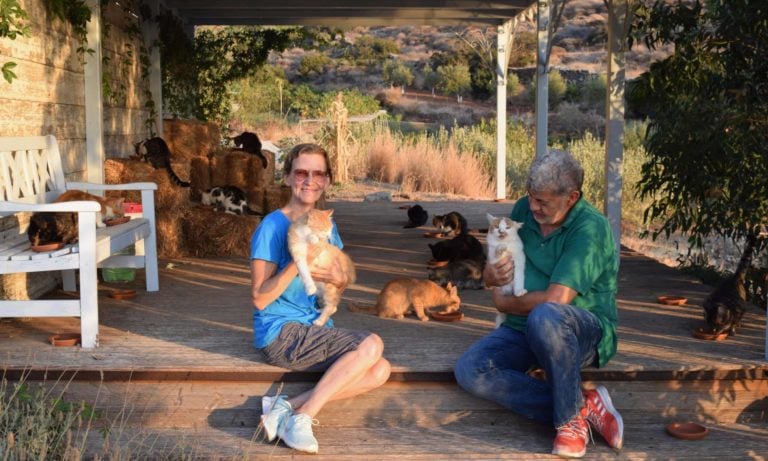 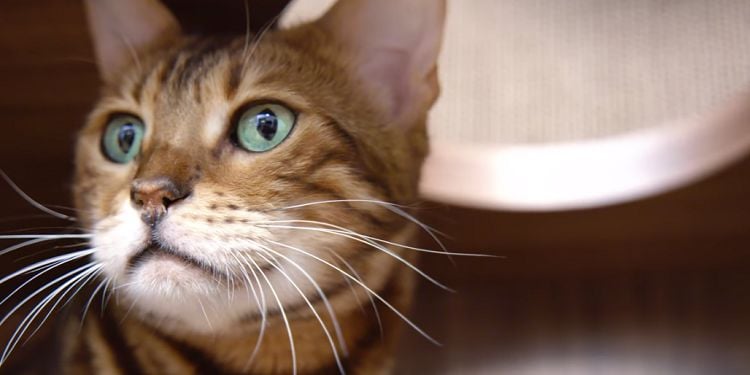 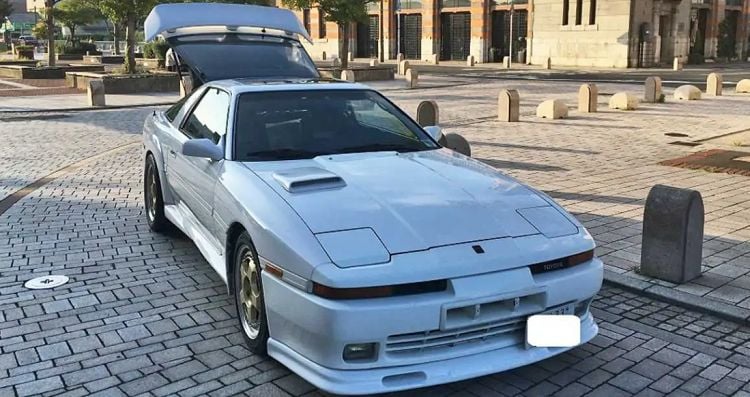 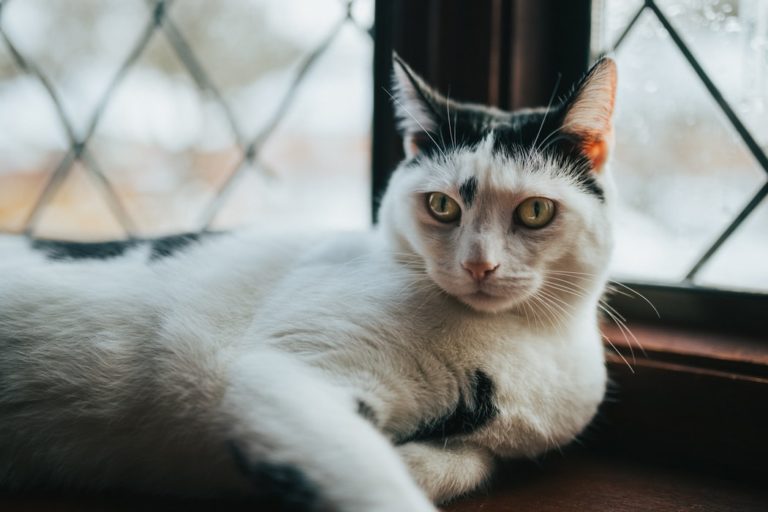