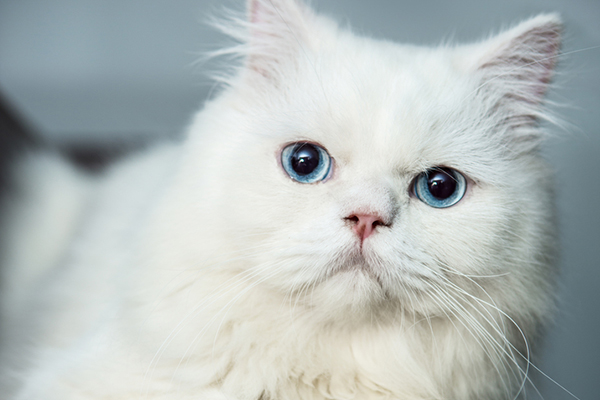 We all know just how beautiful cats with blue eyes can be. Sparkling blue eyes are found in several cat breeds and are especially prevalent in white cats or those with white markings. This blue-eyed cat trait turns up in some other breeds and also occurs equally in both female and males kitties.
Cat-lovers worldwide seek them out and some types even more than others. If you’re not all that familiar with cats with blue eyes but are interested in them, either because you want one or maybe you’re just curious about them, here are ten things to know about cats with those amazing blue eyes:

When a black and white cat crosses your path good luck is coming. If a black cat, especially a
black cat with blue eyes, crosses your path, bad luck could show up before the end of your journey. When your cat cleans her face in front of your door, that’s a sign that guests are coming. And, when a white cat with blue eyes comes to your house, she will be bringing you lots of good luck but only if she stays. So, if one shows up, better take her in and make her a member of your family for years of good luck. 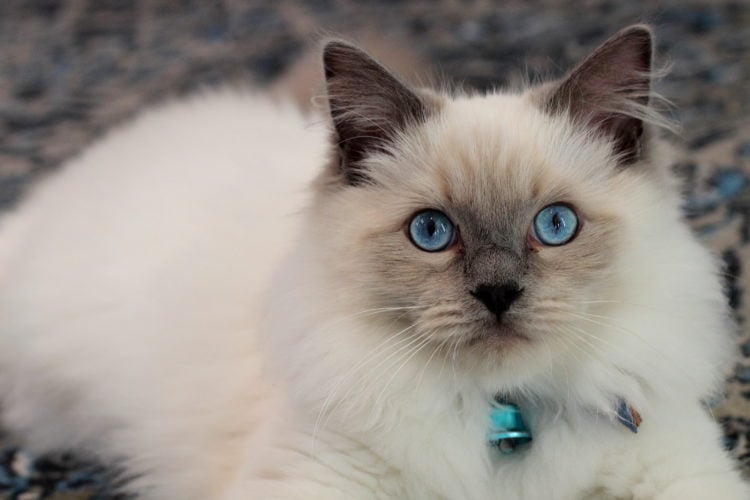 Siamese cats, as well as some other colorpoint breeds, have the recessive gene. This means that their offspring have to inherit a copy of the blue-eyed gene from each one of their parents. Kittens all have blue eyes at birth. The color could remain the same or start changing as the kitten starts maturing. For example, all white-pointed cats are blue-eyed. On the other hand, solid white or even just mostly white kitties could have blue, copper, gold, or green eyes. The fact is, however, that the most common colored cat eyes range from gold to greenish-yellow. When kittens are around a month old, their eyes will start changing color from blue to amber, gold, iridescent green, or even yellow-gold. On the other hand, there is a strong possibility, as well, that her eyes will simply remain blue in color or change to a new blue hue. 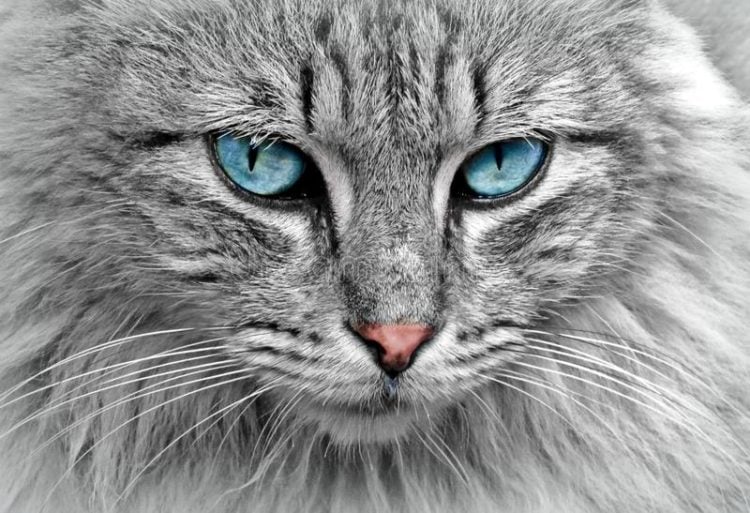 Their eye color is decided by something called melanin. It’s the pigment that is responsible for eye, hair, and skin color. Cats that have those beautiful blue eyes have lower levels of melanin in their eyes. Green-eyed cats have medium melanin amounts and brown-eyed kitties have the highest amount. And, your cat’s genes determine how much melanin she has. 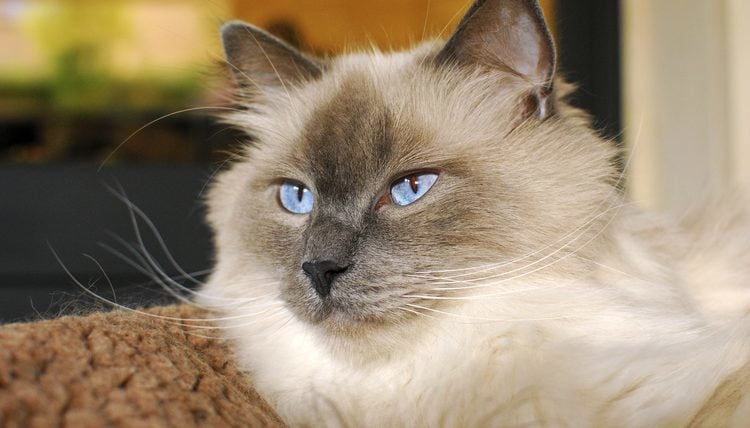 Some people think that white cats with blue eyes go blind more often than other cats but that’s simply not true. Although they may be at a greater risk for congenital deafness, there’s no history of more cases of blindness than any other cats. One breed, which is neither white nor blue-eyed, is the Abyssinian and that particular breed is more prone to blindness.

8. Are Most of The Blue-Eyed Cats White in Color?

No, they’re definitely not. In fact, Birmans, for example, come in a myriad of colors. They range from blue to chocolate, cream-colored, and even red. And, every single shade of Birman, as well as other breeds, looks spectacular in contrast to their striking blue eyes. 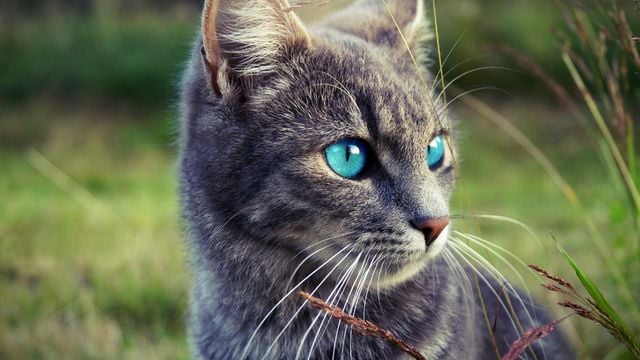 Many people are curious about why this particular blue-eyed breed is called that. It’s because these cats simply have the ability to plop themselves down in complete comfort, drape themselves on the couch, or loll around in the warm sun.

10. Are Ragdolls Friendly and Lovable?

They’re amazingly friendly and super-lovable. One of their favorite things to do is to follow their humans around the house, happy just to be near them. And, then when you pick them up, they’ll amaze you by just going limp in your arms. These adorable blue-eyed kitties are available in chocolate, cream-colored, blue, lilac, red, and seal.

There is some sort of misconception about cats. I cannot tell you how many times I hear people say that they like cats because cats don’t beg for food. Okay; I’ll give them that. However,…

Cats are pretty versatile animals. Some of them are almost like dogs in that they are capable of doing things such as learning to walk on a leash and learning to play fetch. Others are… 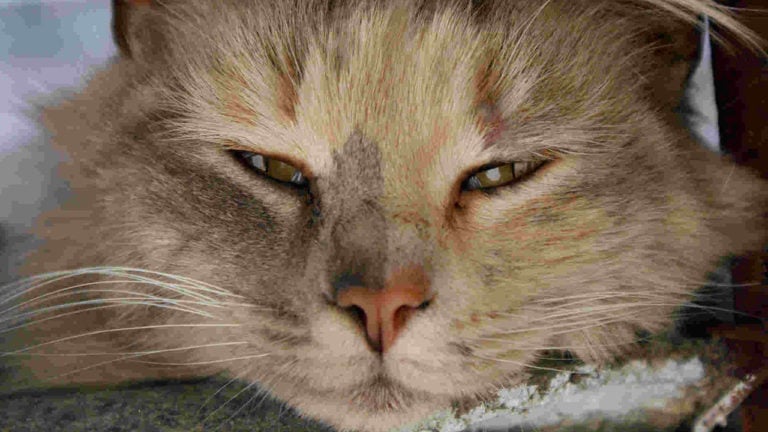 Animals of sufficient intelligence are more than capable of feeling grief. For example, some elephants have been observed visiting the site where one of their herd-mates died years and years ago, which speaks volumes about…

There are so many reasons that adopting an older cat is superior to buying or adopting a kitten. Of course, there is nothing wrong with getting a kitten to grow with your family and love… 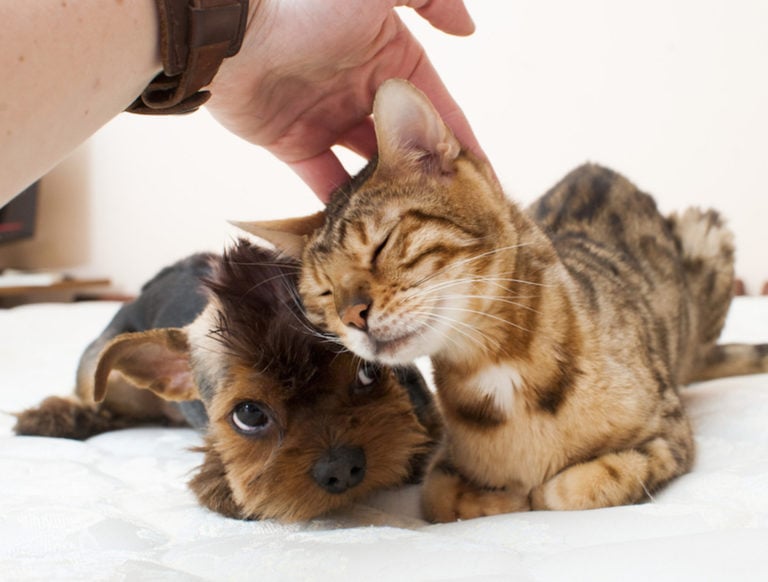 It is probably no secret that dogs and cats just love to have their heads scratched. They practically melt and become big puddles when your fingers begin to move through the fur on their head….