Cats are some of the graceful pets you can have, which is why it is quite painful for us when they suffer rodent ulcer. The disorder, which is also known as eosinophilic granulomas affects the skin and causes sores to occur. When my cat Alex developed it, I managed to treat him in record time using a slight change of lifestyle and natural remedies. I could also have used regimens of steroids and antibiotics, but sometime the simple remedies are the best.

How Do Cats Get Rodent Ulcer?

Well, the name is quite misleading because cats don’t get Rodent Ulcer from rodents. The disorder is caused by an allergic reaction to various allergens, which result in the cat having unsightly lesions that may also be painful. The lesions occur inside the mouth, around the chin and lips, and a few other parts of the body. Cats aged two years and below, as well as female kittens are the most affected by Rodent Ulcer.

The main allergens that have been now to cause the ulcer are fleas, rubber bowls, plastics, some foods, and a compromised immune system. Cats may also get allergies from environmental pollutants and synthetic ingredients found used to make cat litter. If the ulcers are not treated on time, they can lead to a permanent disfigurement, which is obviously a big deal for any cat. Therefore, you must act fast the moment you notice them.

How Alex Got Rodent Ulcer

Alex always lived on a high quality diet that was grain-free and natural. Moreover, I only used glass bowls to feed and water him, and made sure that I washed them in the dishwasher after each use. I also made sure that I gave him only filtered water, used only eco-friendly cleaning products, and his cat litter was all natural and safe for cats. He also did not have any fleas.

Things changed after I lost my job and couldn’t afford the pricey natural foods, instead I started feeding him Fancy Feast Classic. I chose it because it came on a budget price and did not include wheat gluten. Then about a month later, I noticed that Alex had developed oozing sores that also appeared inflamed along the corners of his mouth and on the chin.

I am not new on the subject on cat ulcers; I was therefore able to recognize it immediately as a cat ulcer. Since I had not done anything different apart from changing his diet, I concluded the change of brand of cat food must be the cause of the Rodent ulcer. I decided to change his diet and use several natural remedies to manage the ulcers.

How I cured Alex of Rodent Ulcer

Most veterinarians would have recommended a malady of antibiotics and steroids to cure the ulcer. However, I am a big proponent of natural pet care, and I felt that I should try several holistic remedies. Of course, I consulted friend of mine who is also a veterinarian and has been practicing integrative medicine in Indiana; and he does not mind giving the occasional free advice.

To get started, I switched Alex to a new line of canned foods for cats known as Dave’s and abandoned Fancy Feast. I had checked it, and I found it offered a balance between natural diet and pricing. I then put him on a dose of Immune boosting supplements from Vermont Cat Chews. Those contain 250-milligram of Pet natural supplement L-Lysine, which he took a twice a day. For a natural anti-biotic, I gave home colloidal silver, which a natural mineral that has anti-biotic properties.

I also treated the sores with using some of the colloidal silver using a small spray bottle, and used organic coconut oil to dab the lesions. Moreover, I sprayed the affected areas, his water, and food using the ingenious spray product known as Epic Pet Health Repair. I noticed that the spray alleviated his discomfort upon contact, which was a big relief for me.

While I was ready to take Alex to the vet if I did not see any improvement within a few days, I did not have to. The sores started to abate within a week, and by the end of the second week, my regimen had worked wonders on him; he was cured, and was as handsome as ever.

What to Do If your Cat has Rodent Ulcer

While there are not many people who would be in my position, I would say the first step is to take your cat to the vet first. Once your vet diagnoses that your cat is ailing from rodent ulcer, you may choose your next course of action depending on what the vet may recommend. However, it would not hurt to use some natural regiment on your cat to speed up the healing process. Do you have any experience treating a cat suffering from rodent ulcer? If yes, feel free to share it with us. 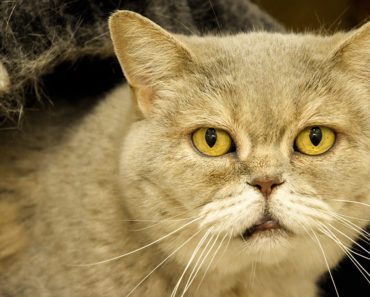 Cat Steals the Show as the Wedding’s Ring Bearer

The 10 Best Charities for Cats

10 Things You Didn’t Know about The British Longhair

10 Things You Didn’t Know about the Burmilla

10 Things You Didn’t Know About The German Rex

Why Do Cats Massage Each Other?

How to Help a Semi Feral Cat Adjust to Your Home

Can you use Neosporin on Cats?