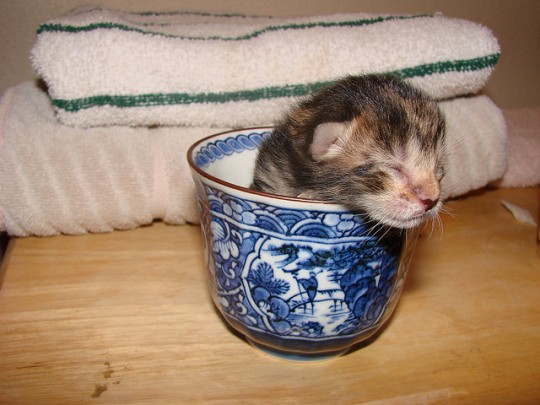 Many of you may have seen a Teacup Cat being advertised in your local newspaper.  These animals are some of the smallest kittens and hands down the cutest.  But there are some serious issues when it comes to Teacup Cats.  Many people who say they specialize in these breeds are less than professional. In fact, some of them are breeding simply for profit ignoring the serious health issues attached to these animals.

These tiny animals are often the result of interbreeding which is why they are so small.  They are genetically defective causing the entire litter to basically be runts.  These less than superior felines will often developed a large number of problems throughout their lives.  Bone defects, heat related issues and seizures are just a few of the problems these animals may face.  Be warned that if you do end up with one of these animals you are going to face a high number of vet bills.  These animals simply don’t live long so avoid these breeders at all costs.   This practice of interbreeding is a cheap way to produce large amounts of small animals.  In fact, many of the kitten mills that have been shut down around the country often contain many of these animals.  Sadly every year more and more breeders are doing this.  One of the best ways to combat this issue is for pet owners to take a stance against them by simply not doing business with them.  Being educated about who you are buying your new pet from is a great way to end this dangerous practice.

Instead You Should Purchase A certified Dwarf Cat

Dwarf cats also have a genetic mutation that causes them to be small.  But unlike the Teacup they are the result of cross breeding two different animals.  While these animals are not certified as being their own breed by the major American breed associations, they are largely accepted outside of the United States.  So if you are looking for a tiny kitten to take home, the Dwarf is the safest and most humane way to do so.  But always remember to check out any breeder before purchasing your animal and don’t be afraid to ask lots of questions.  It’s better to be safe than sorry and no one wants the heart break of taking home a sickly animal.

Image via buzzbom at Flickr.com

Being a pet owner is a beautiful thing. There are so many different benefits associated with owning a pet, whether you have a cat or a dog. Statistically, those who own pets of some sort…

When you stop and think about the idea of traveling with a cat, you probably realize that travel and cats aren’t exactly words you hear together all that often. While dogs often travel with their…

Cats are, by nature, mysterious. They look at you like you’re not all that intelligent, they’re nowhere near as interested in human companionship as dogs, and they’re even the kind of animals who seem to…