There’s an old saying that runs along the lines “you can train a cat to do anything they were going to do anyway”. If you own a cat, you’ll know exactly what we’re talking about. While dogs are born people pleasers, cats are born people agitators. Ask them to sit, and they’ll choose that moment to go on a 5-minute stampede around the house. Pop a bowl of their favorite chicken dinner in front of them, and they’ll suddenly decide they’re vegetarian (well, not really, but you get the idea). Cats are contrary. It might not be a scientific fact, but it’s true none-the-less. Just look at how they like to turn their heads and look the other way while you’re trying to get their attention. Somedays, you could stand in front of them dressed like Santa while dancing an Irish jig and they still wouldn’t deign to glance your way. Which makes the news that scientists may have found a way to get your cat to pay attention to you exciting information for pet owners. The trick? Blinking very, very slowly.

As part of a study titled ‘The role of cat eye narrowing movements in cat-human communication’ in the Nature journal Scientific Reports, a team of psychologists led by Dr Leanne Proops from the University of Portsmouth and Karen McComb from the School of Psychology at the University of Sussex researched a group of cats to test their response to slow blinking. The act of blinking effectively narrows the eyes and generates what’s commonly referred to as a ‘cat smile’. For years, cat lovers have suggested that cats seem to respond more to them when they narrow their eyes than when they adopt a neutral expression, suggesting there’s something about the ‘cat smile’ that makes us more attractive to our feline friends. So far, it’s been more of an urban myth than a scientifically proved phenomena. Thanks to Proops and McComb, that’s about to change.

To kick off their research, the team started by taking two dozen cats, all with healthy eyesight. As port.ac.uk notes, the first experiment utilized the help of 21 cats from 14 different households. Of the 21 cats, 10 were male and 11 were female, with ages that ranged from 0.45–16 years. To make sure the cats felt comfortable and secure during the experiments (the best way to get a natural response), the experiment was conducted in each cat’s home and with the assistance of the cat’s owner. After the cat had settled into a comfortable spot, their owner was asked to sit or crouch one meter away and, while looking in the cat’s direction, begin to blink slowly.

The 2nd experiment drew on the support of an additional 24 felines, twelve of whom were male and twelve of whom were female. Ages ranged from the very young (1 years old) to the very senior (17 years old.) This time around, researchers with no prior contact with the cat either adopted a neutral expression with no direct eye contact, or slow blinked. Along with testing how the cats reacted to the different types of eye contact, the researchers also monitored how they preferred to approach an unfamiliar face. Would they take kindlier to an outstretched hand with the palm facing upwards while the researcher was blinking, or would they not give a hoot what kind of facial experiment was being adopted?

After videotaping both sets of experiments, the researchers retired back to base camp to review the evidence. What they found was illuminating. As mashable.com notes, the cats were much more likely to narrow their eyes or slow blink at their owners if their owners were engaged in the same activity. When their owners adopted a neutral expression, the cats did the same. The same pattern was seen during the second experiment with the group of unfamiliar experimenters. If the experimenters blinked, so did the cats. If the experimenters adopted a blank face, the cats almost uniformly ignored them. Just as interestingly, the cats were much more likely to approach when the strangers put on their best cat smile.

Speaking about the findings of the research, Professor Karen McCombs says: “As a cat owner, it’s great to show humans and cats can communicate this way. It’s something cat owners have suspected, so it’s exciting to have found evidence. “This study is the first to investigate the role of slow blinking. And it is something you can try yourself with your own cat as a way of improving the bond. Try narrowing your eyes like you would in a smile, before closing them briefly. You’ll find your cat responds in the same way and you can start a conversation.” Dr Tasmin Humphrey adds to McCombs’ enthusiasm by pointing out the wider benefits of enhanced communication between cats and people. “Understanding how cats and humans interact can enhance our understanding of cats and tell us more about their socio-cognitive abilities,” she says, adding “Our findings can be used to evaluate the welfare of cats in numerous settings, including veterinary practices.”

Knowing that cats respond to slow blinking is one thing (and probably something a million or so cat owners could have told you long before the scientists started getting involved). But understanding why they do it is a different thing entirely. In some ways, it’s very much consistent with the admittedly limited studies that have been conducted into feline behaviors previously. Although cat psychology isn’t quite so well-researched as the canine equivalent, several studies have suggested that cats have developed certain behaviors specifically as a way of interacting (and yes, even occasionally manipulating) their human parents. Examples include ‘solicitation purring’, learning to discriminate the sound of their own name from other sounds, and picking up and responding to emotional cues. As gizmodo.com notes, more research might be needed before we know exactly what cats are thinking or feeling when they respond to our slow blinks. For now, it at least gives us a sure-fire way of getting their attention.

When our second child was born, the little dog we had for a very long time went a little bit nuts. He wasn’t thrilled when we brought home baby number one three years before and…

When it comes to Ringworm in Cats many pet owners immediately freak out.  But this common fungal skin infection can easily be treated.  Many people believe that Ringworm in Cats is actually a worm imbedded… 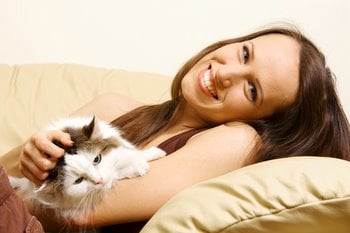 Medical researchers have discovered a miracle cure that can reduce stress, lower blood pressure and improve mental well-being — no pills required. The cure is your cat, according to a recent conference held by the…

Summer is just another season for you and your cat to have good quality time to spend together. However, there are a few safety precautions you should take before you go deep into a fun-filled…