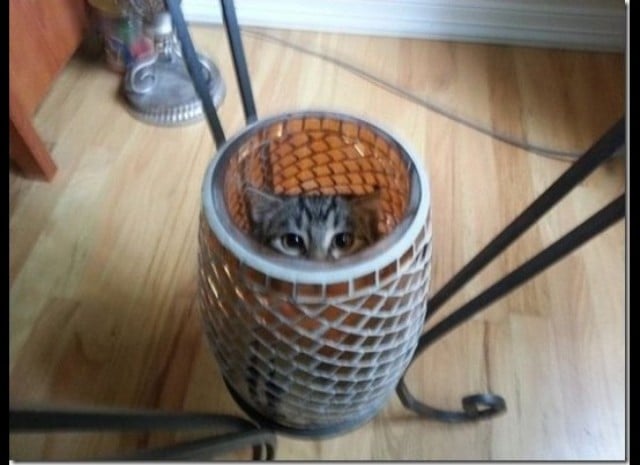 Cats like to hide out in a number of places, and we all know it’s true. But we just have to go ahead and go out on a limb and say that some cats take things a bit too far. Closets, shelves, book cases, the hiding place behind decorative pillows; we get it. But when cats start hanging out in places that give you a bit of a heart attack when you finally see them there, well, it’s a bit much. Look around your house and take in all the everyday things like your pool table and your oven and now imagine them as the favorite hiding places of your cats. It might seem a bit off-the-wall, but it’s actually true. You won’t believe where some cats like to hide, and we have pictures to prove it to you. 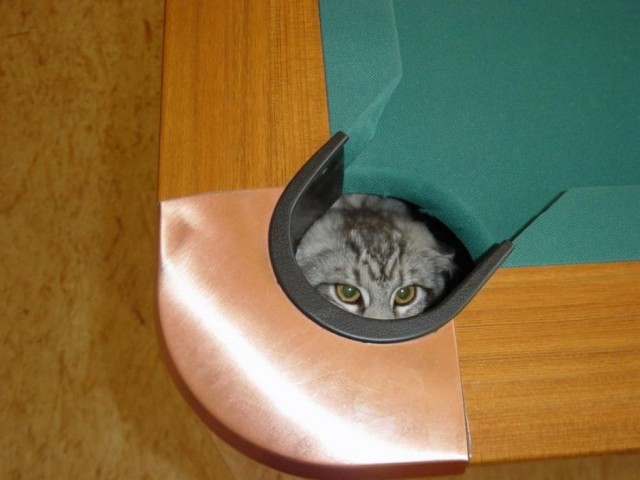 If we go ahead and ask you not to scratch, will you laugh or roll your eyes in disgust at our obvious attempt at hilarious humor? Because it’s really early in the morning and without having had a cup of coffee just yet, it does seem quite hilarious to me. Either way, though, this cat has found his new home in the pocket of a pool table, and it’s probably a big win for this little kitty. The kids might not be tall enough to see him in there, which means he’s probably going to be all right. 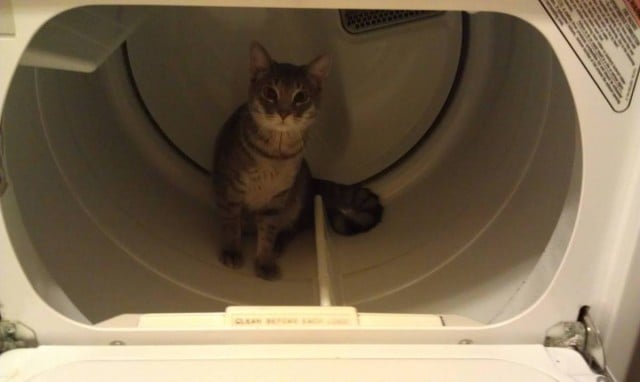 The Cat that Likes to “Snuggle”

We all love a good snuggle, but this cat takes it to a whole new level hopping right into the dryer with the snuggle. Let’s just hope that these homeowners check the dryer for things like lost socks and dry laundry before they go throwing anything else into it and starting it. At the very least, let’s hope that the thudding of the cat going around in circles as it dries would be enough to alert them right away to see what might be in there. 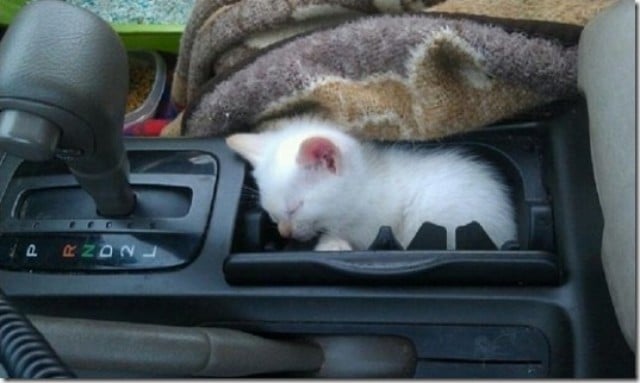 Be honest; you know you use your car cup holders for so many other things that are not cups. You do use them for your cups, but we all know that your morning coffee never actually leaves your hand so chances are good that the cup holder is where you leave your phone, change, notes, shopping list and anything you have to take from the kids to prevent them from arguing with one another. But do you leave your cat in the cup holder on a regular basis, or just on occasion? 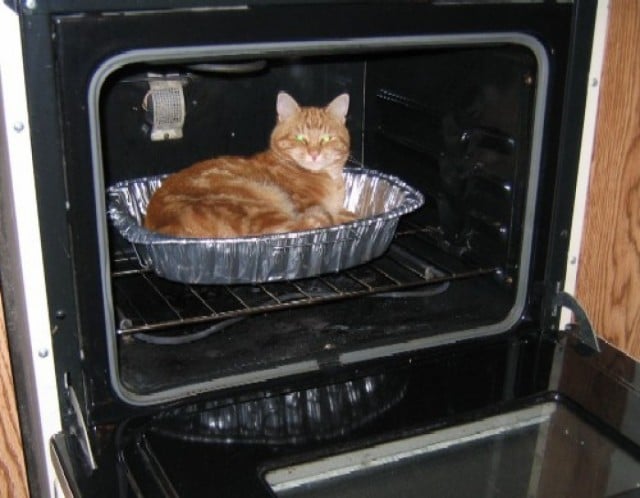 Do you think it tastes just like chicken? To be honest, there will probably be a little bit of hair in your food if you choose to bake this particular dish. I know some people have little kitchen storage and they find it where they can, but this is really taking things to a whole new level. But on a good note, if this oven is anything like mine, this cat never has to worry about being in the hot seat. 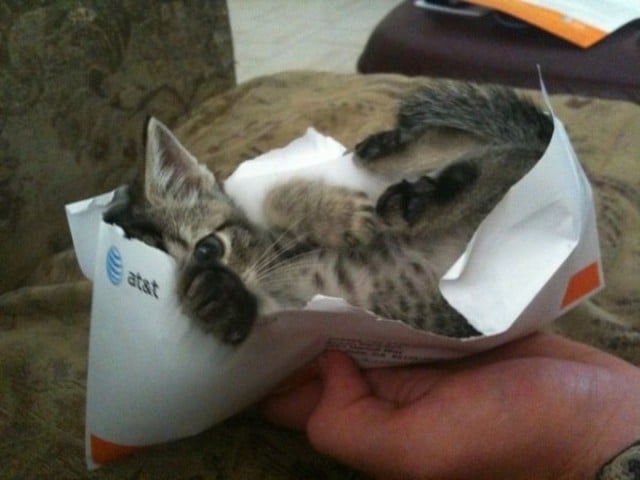 Special delivery! What a cute kitten in a tiny envelope. This has to be a lot more interesting to get out of the mailbox than the mortgage statement or that darn credit card bill that does not pay itself off every month without a little assistance from your bank account. Either way, we do think this is the cutest mailed package to ever arrive at someone’s house, though we think it’ll need a slightly bigger envelope and maybe a second stamp. 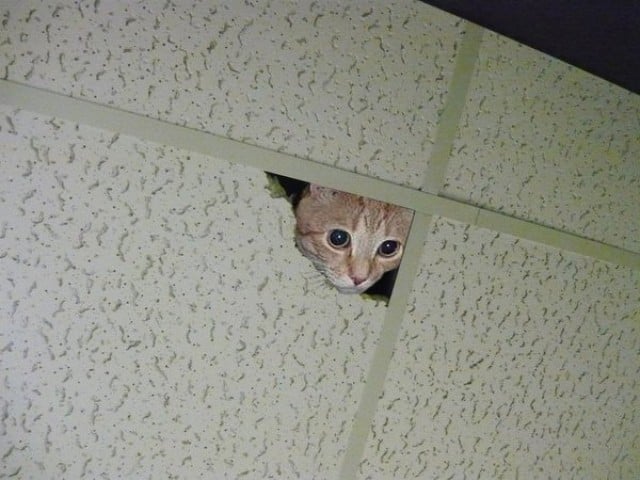 Have you ever gotten that feeling that someone is watching you, but you can’t put a finger on it? Perhaps it’s because you haven’t thought to look up and see the little hole made in the ceiling panel (I assume this must be a very old classroom or office building) by the cat who wants to watch your every move. He’s probably wondering why you manage to play Angry Birds so much throughout the day but you just cannot be bothered to help him get his food and water dish filled up at his convenience. 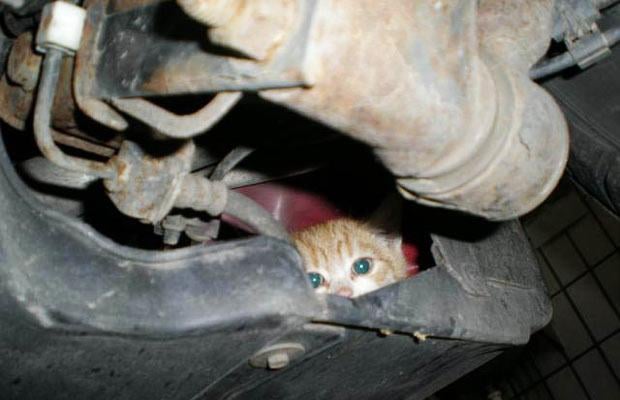 They say during the coldest months of the year you should always check your engine for animals, and they’re not kidding. Who are they, really? But aside from that, this little kitty likes to stay warm by hiding out in a car engine, and it’s a good thing that someone noticed the cat was there before they took off and started driving throughout the day. It could have gotten quite ugly. 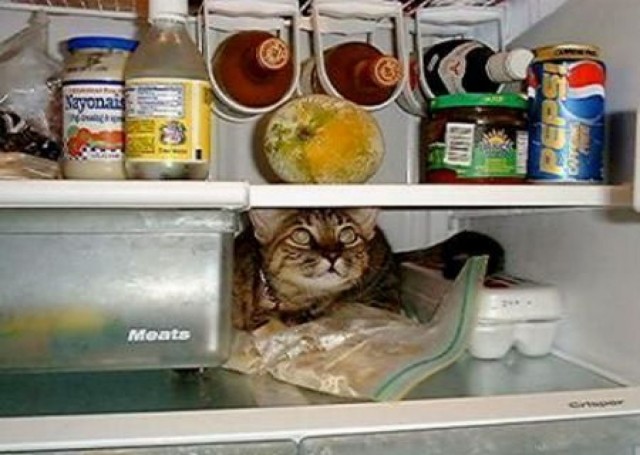 There are so many things about this cat that are just cool. For instance, the fact that he’s hanging out inside someone’s fridge literally makes him a cool cat. On that note, however, this is precisely the reason I’m not a big fan of eating at the homes of other people. No, that’s not true. I don’t like eating at the homes of other people because I don’t know if they clean their dishes and counters correctly. It never occurred to me that they might let their cat in the fridge. 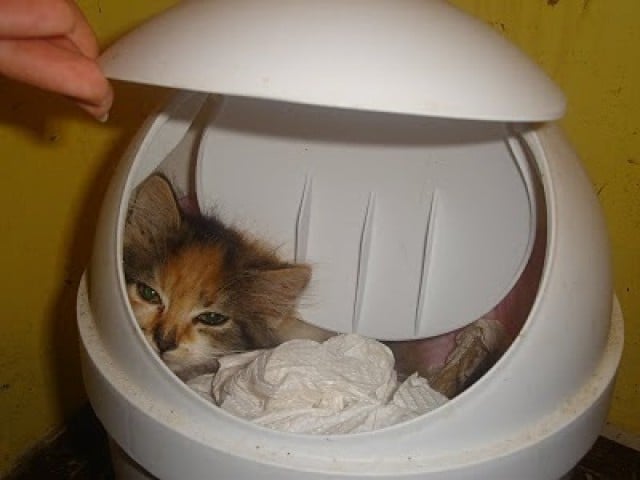 You can take the trash out of the kitty, but you can’t take the kitty out of the trash. Talk about a cat that desperately needs a bath. This little guy is just a bit on the stinky side after taking an afternoon nap in the trash can. We think he might be just a bit gross.

Cats are such interesting creatures. They seem as if they don’t care about anything, but then they get on your lap and refuse to leave you alone for hours. They ignore your constant presence all…

My cat wanted me to be a terrible person; really, really wanted me to be one. I’m trying hard to live up to his wants now that he’s missing and our kids are devastated (but…