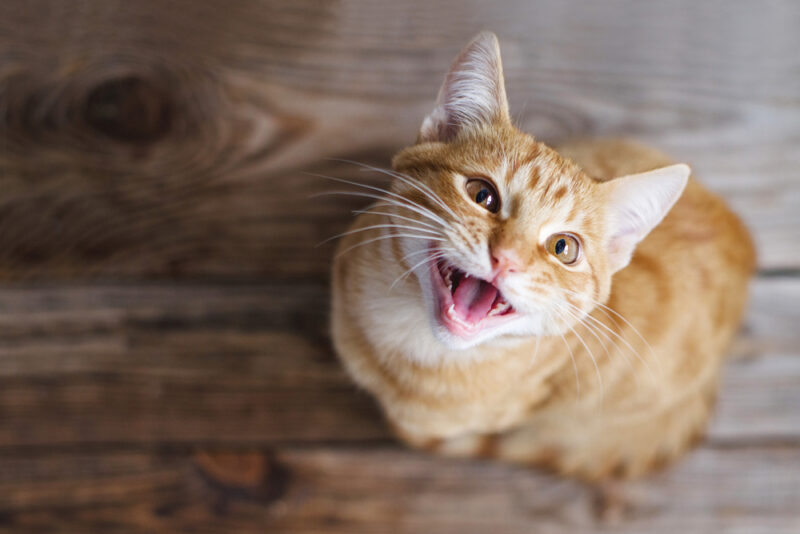 What Is a Cat Meow?

The meow is a kind of vocalization. It is highly recognizable, as shown by how it has inspired numerous onomatopoeic words in numerous languages. One example would be the French miaou, while another example would be the German miau. Similarly, Arabic has muwaa’, Mandarin Chinese has miāo, and Urdu has miyāʾūṉ.

Indeed, University College London says the ancient Egyptians called cats miu, which is another obvious onomatopoeic word. With that said, just as how we can change the way we pronounce words to change their exact meaning, cats can do the same. The meow is an excellent example of this principle in action.

That makes sense because ASPCA says the meow is a very versatile vocalization. It is a well-known fact that adult cats don’t meow at one another. Instead, they reserve the meow for communicating with humans.

Since kittens meow to get their mothers’ attention, the popular speculation is that cats adapted the sound for communicating with humans. In that context, it has become much more than what it once was.

Generally speaking, this vocalization indicates the cat is asking for something. The issue is figuring out what that something might be because it is so context-dependent. Sometimes, cats use the standard meow to ask their cat owners to let them in or let them out.

Other times, cats use the standard meow to ask for food, playtime, and other things they enjoy. There is no way to tell unless interested individuals have the context because a standard meow can’t communicate as much information as human speech.

Once again, it is a very context-dependent kind of vocalization, meaning interested individuals have no way to know what the cat wants unless they are familiar with the context in which it makes its demand. The Spruce mentions that it is common for cat owners to wake up in the middle of the night because of their cats’ meowing. Oftentimes, those are long meows.

Shorter meows are sometimes called mewls. They are quite different from either their standard-length or longer-length counterparts. Supposedly, that is because cats use shorter meows as greetings rather than anything else.

As always, the context is important. If a cat mewls while rubbing its cat owner’s legs, it seems safe to say that it welcomes the latter.

Pain means that something is wrong. Sometimes, the source of the pain is obvious and easily resolved. Other times, interested individuals might want to bring their cats to their veterinarians to see what is happening.

When cat owners hear their cats make longer meows, those longer meows are often low-pitched. That is because a lower pitch indicates the cat is unhappy. Most of the time, it is the approximate equivalent of human grumbling, meaning the cat is unhappy but not so worked up that there are going to be immediate issues.

What Other Vocalizations Can Cats Make?

Those curious about the meow should also learn about other cat vocalizations as described by Insider and other sources:

Purring isn’t as complicated as meowing. Still, it is another sound that can mean very different things depending on exactly what is going on. Generally speaking, purring means the cat is feeling happy. Cats also use purring as a way of soothing. That can apply to themselves.

Due to that, if interested individuals hear a cat purring while showing other signs of sickness and impairment, they should get the cat checked out because it could be ill or injured. The curious thing is that cats also purr as a way of soothing their cat owners.

Chatter is one of the more unusual sounds that cats make. Still, it isn’t hard for interested individuals to guess what it means even if they have never come upon it before. After all, cats chatter when they observe birds and squirrels through a window. As such, it indicates excitement.

Specifically, the kind of excitement a predator feels when eyeing hunting targets. Cats are far from being the biggest predators out there, as shown by how there are bigger predators that target them when the chance comes up. Despite that, cats are very good at hunting small birds, mammals, and other animals, so much so they are one of the worst invasive species in existence.

Growling and hissing are sounds that need little explanation. These sounds mean the cat is extremely worked up. It could be feeling everything from fear to anger and annoyance.

Whatever the case, the cat is ready to lash out in an instant because the growling and hissing are clear warnings to stay away. Cat owners might be tempted to rush up to help their cats. That is a terrible idea. Worked-up cats aren’t very good at differentiating between friend and foe.

Howling and yowling sound like particularly drawn-out meows. They are yet another set of attention-getters. Moreover, if interested individuals hear howling and yowling, they should check out the situation as soon as possible.

That is because these sounds often indicate the cat is in some kind of distress. It might not be a huge problem from a human perspective, but it is sure to be a problem from a feline perspective. Due to that, it is better to get the cat out of its predicament.

Be warned that cats can howl and yowl for other reasons. For example, if they haven’t been either spayed or neutered, they might be engaging in mating behavior. Alternatively, cats sometimes howl and yowl because they are feeling confused. Sadly, cats can develop mental health problems in much the same manner as humans, so this potential cause is particularly relevant for older cats.

How Else Do Cats Communicate?

Besides vocalizations, cats communicate in other ways:

Cats have an excellent sense of smell. As a result, it makes sense that they use scent as a way of communicating with one another, which is possible because they have scent glands located throughout their bodies.

Unfortunately, humans have a much poorer sense of smell. That means we can’t pick up on this part of feline communication with ease.

Moving on, cats also communicate through physical contact. One example involves grooming. Cats are famous for grooming themselves. However, they are also one of the species that engage in social grooming, which is when animals in the same group groom each other as a way of strengthening social bonds.

In some cases, cats will extend these behaviors to their cat owners. That is a significant show of closeness. Another example involves biting. Most people would rightfully interpret that as a sign of hostility. Still, it is important to remember that play bites are different from real bites meant to injure the target.

Interested individuals should still discourage such behaviors because cats aren’t always good at judging their force. Even so, play bites show affection in the same way that real bites show hostility.

Cat owners should also be familiar with cheek rubs and head butts. These are some of the best-known ways for our feline companions to show affection. Amusingly, there is also a more practical element to these actions. Cats have a lot of scent glands in their head.

Of course, cats also show physical cues that reveal much about their state of mind. Reading them isn’t a perfect way of figuring out what is going on. A lot of physical cues have more than one potential meaning. Furthermore, physical cues can seem contradictory to one another.

Still, combining physical cues with other cat communications should provide interested individuals with the greatest amount of insight.

For starters, a cat’s ears are very expressive. When they are inclined forward, that suggests the cat is feeling either happy, engaged, or attentive. In contrast, when they are inclined either backward, sideways, or even flat, that is a huge warning sign. The cat could be angry, scared, or a mix of the two.

Whichever is the case, interested individuals should stay away until the cat is feeling better about the situation. Swiveling ears are the easiest to read. They are always a sign that the cat is paying close attention to their surroundings.

A quivering tail is a sign of excitement, though the exact kind of excitement can be quite different from case to case. Moving on, a cat’s body posture can mean a great deal as well. An arched back can mean either a relaxed cat or an agitated cat. The critical difference is whether the fur is lying flat or the flat is standing up.

Naturally, a cat that is arching its back towards its cat owner’s touch suggests it is receptive to petting at the moment, whereas a cat shying away means the exact opposite. Cats on their backs can mean either a very relaxed cat or a very agitated cat. On the one hand, it exposes the belly, meaning it can be a huge show of trust.

On the other hand, it means presenting all four paws towards a perceived enemy, meaning it can be a mix of attack posture and threat display. Under these circumstances, being able to interpret the cat’s vocalizations is critical. 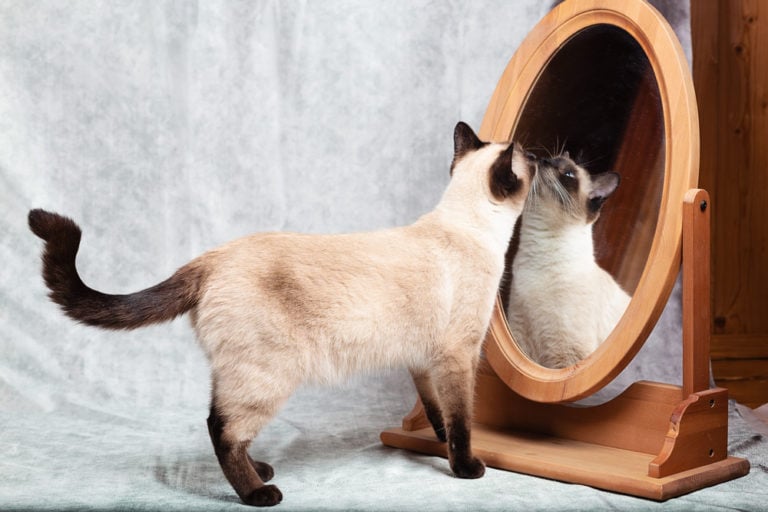 The first time your cat notices his reflection in the mirror is a memorable time for most of us. The typical response is one of fear and assuming a defensive position. Not all cats react… 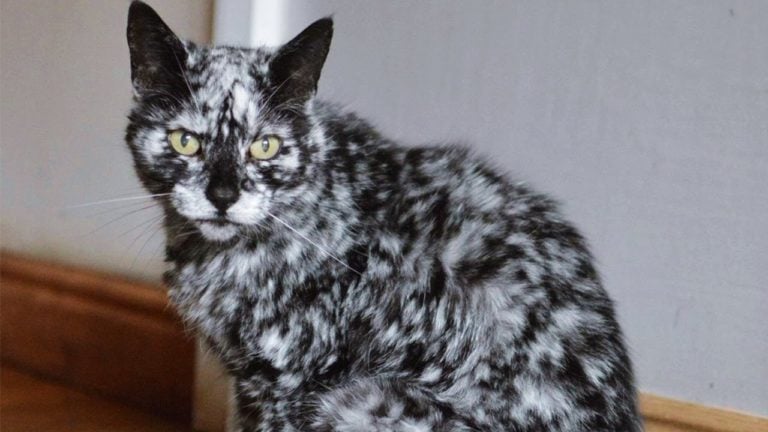 Why is it that doctors, pharmacists, and scientists seem to have a name for everything? It may be necessary but some of those names sound worse than the disease or condition actually is. Vitiligo in… 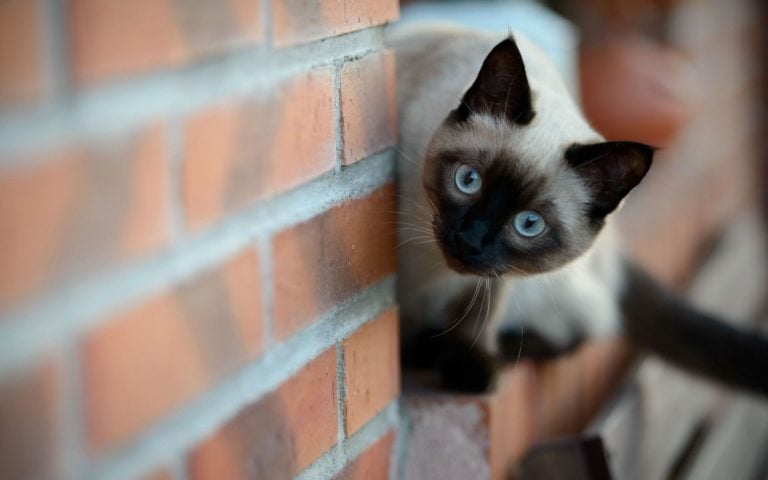 Owning a cat is one of the most enriching and rewarding things a person can do. Regardless of the breed, color, shape, or size of a feline, they make great and loving companions. Plus, they… 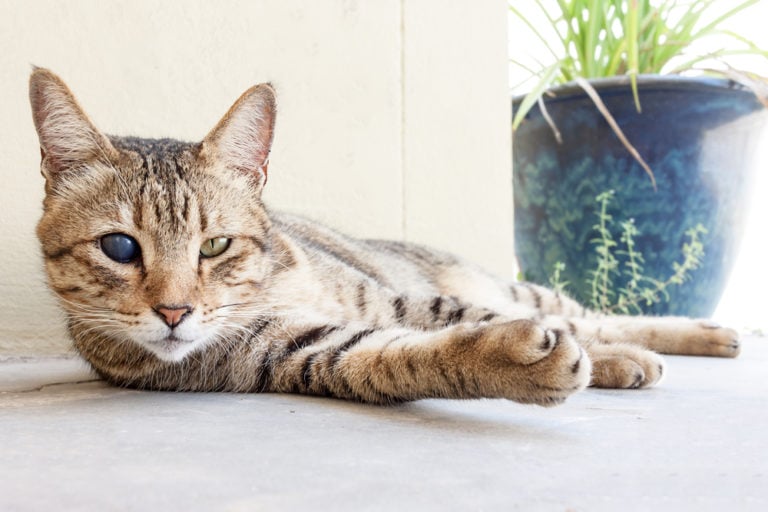 The loss of their vision is a huge blow to cat. However, it is important to note that blind cats are very much capable of living happy, healthy lives. Something that is particularly true when… 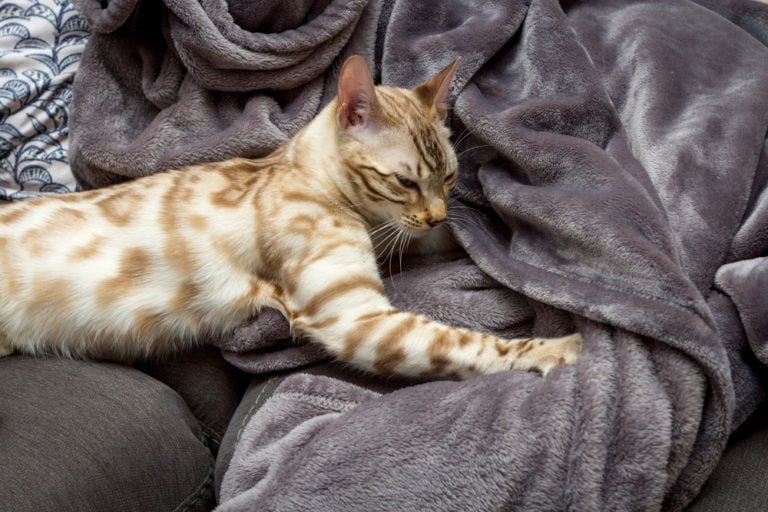 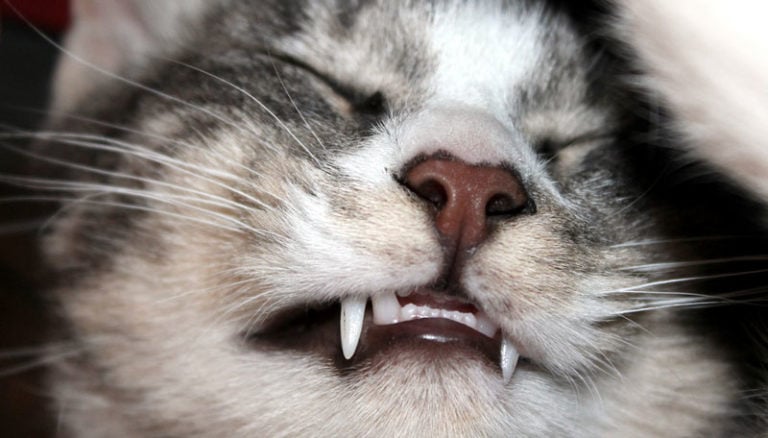