Ever since they first started drawing attention for their striking beauty, their affectionate natures, and their playful ways, the Chocolate Point Siamese has been one of our favorite pets. Instantly recognizable for their distinctive meows and their exotic looks, these fascinating creatures make loyal, loving companions. If you’ve been beguiled by their blue-eyed beauty, find out more as we look at ten things you don’t know about the Chocolate Point Siamese.

1. They’re one of the oldest cats breeds in the world

Although no one’s 100% certain where and when Chocolate Point Siamese cats were developed, most people think they were first domesticated in Thailand during the 14th Century. As mentalfloss.com writes, the first depiction of a cat with ‘blue eyes’ and ‘dark points’ in literature can be found in a manuscript from the time titled Tamra Maew, or ‘The Cat Book Poems.’ Some people think Siamese were originally bred as the pet of royalty; others think they were domesticated by Buddhist monks. Either way, this is clearly a very old and distinguished breed – some experts suggest it may even be one of the oldest domesticated breeds in the world.

2. They’re not the only Siamese around

The Chocolate Point Siamese might like to think it’s the only Siamese kicking around, but it’s actually one of four officially recognized varieties of Siamese. It derives from the Seal Point Siamese, a cat with dark brown points that look almost black in certain lights. Other variations include the Blue Point and the Lilac Point. Over the years, the Siamese has been bred with other breeds to produce the Tortie Point, Flame Point, Lynx Points, and Cinnamon Point, but these are considered ColorPoint Shorthairs rather than purebred Siamese.

The Chocolate Point Siamese may be known for their beauty as much as anything else, but despite their reputation, they’re actually incredibly low maintenance. Fastidious groomers that they are, they can take care of most of their grooming needs themselves. Thanks to their short-haired coats, you won’t need to worry too much about shedding, either. A once-weekly brush should be all that’s needed to keep them looking sleek and gorgeous. Throw in the occasional nail clipping and ear cleaning session, and that’s it.

Chocolate Point Siamese cats are loud – so loud, in fact, they’ve earned the nickname “Meezer” in honor of their overly vocal tendencies. These Chatty Cathy’s love the sound of their own voice, and judging by how fond they are of meowing sweet nothings into our ears, they think we’re pretty fond of it too. If they’ve got something on their mind, they’re going to tell you about it – whenever and wherever they can.

5. They come in two types

If you think variety is the spice of life, you’re going to love the Siamese. Not only do they come in several different shades, they’re also available in two different body types: traditional and modern. The traditional type is characterized by a round, apple-shaped head and a relatively chunky body. In some quarters, the traditional Siamese has been reclassified as the Thai Cat. In contrast to the chunky traditional Siamese, the modern Siamese is all sleek curves, defined angles, and long lines. Streamlined, slender, and blessed with a triangular-shaped head, slanted almond shaped blue eyes, and big, pointed ears, they’re as much a work of art as they are cat.

When you welcome a Chocolate Point Siamese into your life, you can kiss goodbye to any thoughts of privacy. This is a cat who wants to be where you are and go where you go. And don’t think that shutting the door behind you will give you some peace – they’ll just keep up a constant stream of chatter until you relent and let them in. If you want the odd moment of downtime away from your cat, you might want to consider buying them as a pair -they’re far less likely to get lonely when you’re not around if they’ve got a playmate to kick around with.

As iheartcats.com explains, while most blue-eyed cats carry recessive traits that make them vulnerable to hearing issues, the blue-eyed Chocolate Point Siamese has crystal clear hearing. Unfortunately, the same can’t be said of their vision: as well as experiencing difficulties with night vision, they’re prone to progressive retinal atrophy (PRA), an inherited disease that can result in blindness.

8. They used to have crossed eyes and kinked tails

As purrcraze.com notes, when Chocolate Point Siamese cats were first developed, they were known for having crossed eyes and a kinked tail. As the breed started to achieve popularity in the West, it was decided that these traits were unattractive and should be bred out. These days, it’s rare to find a Siamese with either condition.

If you’ve ever seen Disney’s Lady and the Tramp, you won’t need any introduction to the mischievous Si and Am. But the all-singing, all-dancing duo aren’t the only Chocolate Point Siamese’s to work their way into popular culture. In the ‘Wizard of Oz’, a Siamese cat is to blame for Dorothy missing her balloon ride back to Kansas; in Amy Tan’s ‘Sagwa, the Chinese Siamese Cat’, they’re the star of the show. They’ve also featured in ‘The Incredible Journey’, the iconic Hang in there, Baby poster, on the cover art for the Blink-182 album ‘Cheshire Cat’, and as the inspiration for the popular Pokémon character, Meowth.

10. They’re born without any points

For the first few weeks of a Chocolate Point Siamese’s life, it will be snow white from head to toe. After a while, it will start to develop its distinctive markings. Until then, there’s no way of knowing whether the kitten will be a Seal Point, a Lilac Point, or a Chocolate Point. As catster.com writes, Siamese cats are essentially temperature-sensitive albinos. When their body temperature dips below the standard body temperature for a cat, the albinism is blocked, and the modifier gene, which inhibits pigment in the fur, is activated. As their tail, paws, ears, and noses are usually cooler than other parts of the body, this explains why the points develop where they do. It’s also the reason why Siamese born in hotter parts of the world are usually lighter than those born in colder climates.

Kitten Left Behind By Family To Facing Painful Tongue Ulcers 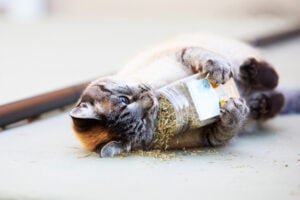 New Study on Catnip Shows It Protects Cats from Insects 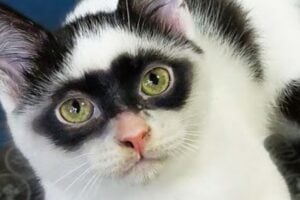 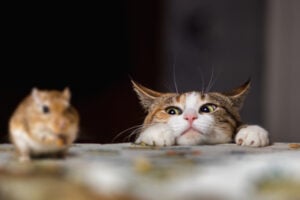 Why Do Cats Gag at Combs?

Do Our Cats Need to Have a Curfew?